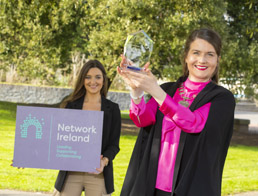 Network Ireland is calling on members across the country to apply for their prestigious Businesswoman of the Year awards ahead of the deadline on April 16th. The annual programme highlights the achievements of women who understand business, who are passionate about their career, and show a determination to succeed no matter what life throws at them.

Preparation is well underway across 14 Network Ireland branches nationwide ahead of their local finals, from which winners will be selected to go forward to the national awards in October. The gala event is a major highlight of the group’s calendar and will coincide with Network Ireland’s annual conference.

National President of Network Ireland Aisling O’Neill says: “The resilience of women in business over the last year is evident in every corner of Ireland. Our members have successful careers, run successful businesses, but in many cases also juggle the needs of their families and are involved in their local communities. My chosen theme for my term as President is ‘Power of Network Ireland’ and part of that is supporting each other through tough times, but it’s also about celebrating the wins – and we need that this year more than ever.”

Maura Glynn is Network Ireland’s National Awards Co-ordinator. She says “Applying for these awards is a fantastic opportunity for our members to review their current position, learn more about themselves, and outline what they would like to achieve in the future. Their stories are truly inspirational and these businesswomen deserve to be recognised for that.”

Photo: National President of Network Ireland Aisling O’Neill (r) with the organisation’s Social Media Manager Amy O’Sullivan, as the group issued a reminder for women to apply in time for the Network Ireland Businesswoman of the Year Awards. The deadline for applications is April 16 at 5pm. Photo: Patrick Browne

Pictured at the launch of the Wrigley Oral...

Ireland has become the first country in the...