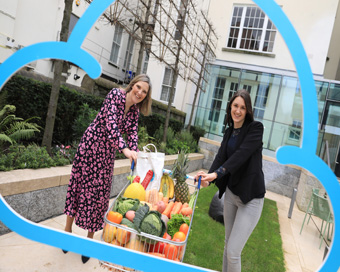 New research by Amárach to mark AIB extending its partnership with FoodCloud shows that over a third of the public feel they waste more food since Covid-19 restrictions began.

The research, conducted by AIB and social enterprise FoodCloud in February 2021, shows 37% of respondents feel they are wasting more food than before the pandemic even though 8 in 10 people surveyed claim to be taking action to reduce their food waste. Two-thirds of the 1,000 surveyed indicated they had an awareness of the connection between food waste and climate change, with 80% of people in Ireland keen to learn more about how to avoid wasting food.

Nearly 4 in 10 Irish adults are concerned about the amount of food waste in their family, with people in Dublin and Munster most concerned. However, all over Ireland people are deeply aware of climate change with 97% saying they are feeling the effects of climate change on their day to day lives.

According to the UN FAO (United Nations Food and Agriculture Organisation), food waste is responsible for 8% of global greenhouse gas emissions. According to Project Drawdown, an international research project on mitigating climate change, stopping food waste has been recognised as the number one individual solution to reverse global warming, closely followed by health, education and plant-rich diets. It is through this prism that FoodCloud operates, with a vision for an environmentally-friendly food system that supports food security and resilient communities.

According to Project Drawdown, reducing food waste has been recognised as the single biggest individual solution to reverse the effects of climate change.

To continue tackling the enormous environmental issue of food waste and to support local communities across Ireland, AIB has renewed its partnership with FoodCloud for another three years, investing €1.5 million to support the social enterprise’s ambitious 2021–23 strategy. The renewal comes on the back of a successful three-year partnership, during which 6,300 tonnes of surplus food were redistributed – the equivalent of 15.1 million meals and 20,353 tonnes of CO2-eq avoided.

FoodCloud has been a key partner of the bank’s AIB Together programme since 2018. Over that time the partnership developed a significant volunteer programme with approximately 1,200 AIB employees volunteering at FoodCloud’s hubs for a total of 7,524 volunteer hours. This volunteering involved packing food which then went onto charities, as well as skilled volunteering which involved AIB staff supporting FoodCloud in the areas of social media, technology and finance.

Speaking about the partnership renewal, Mary Whitelaw, Director of Sustainability at AIB said: “As Ireland’s largest financial services provider, we have a responsibility to our customers and country to lead the way in the fight against climate change, ensuring a greener tomorrow by backing those building it today. I’m delighted to announce the renewal of our partnership with FoodCloud which will support them for a further three years, as they continue to expand their footprint across Ireland.

FoodCloud has clearly demonstrated what can be done to practically address environmental and societal issues – protecting the environment while providing food to those who need it most.

This closely aligns to AIB’s own carbon-reduction goals to achieve carbon neutrality in our own operations by 2030 and to increase green and transition lending to 70% of lending to new customers by 2030.”

Iseult Ward, CEO of FoodCloud said: “With the support and security of our three-year partnership with AIB, FoodCloud were positioned and ready to respond to the increased demand for food within communities brought about by the Pandemic.

Having this certainty of support from AIB, meant we were able to take on four new staff in a very short window, which were further supported by AIB volunteers, who have become an integral part of our operations since our partnership began in 2018. AIB’s support over the next three years will further increase FoodCloud’s capacity to redistribute food, boost the expansion of our technology beyond retail to the wider supply chain, and support collaborations with growers to rescue more food at an agricultural level.”

Pictured: Mary Whitelaw, Director of Sustainability at AIB with Iseult Ward, CEO of FoodCloud – AIB has announced it is to further support FoodCloud in €1.5 million partnership for the next three years.

Business owners must prepare for the new...

Putting the Spark into Social