Michelin Stars in Her Eyes! 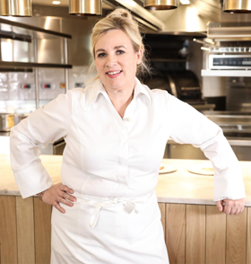 2021 is already proving an exceptional vintage for Hélène Darroze who, after receiving a second star in the Michelin Guide France recently for her restaurant “Marsan” in Paris, has also been awarded the ultimate 3 stars in the Michelin Guide Great Britain and Ireland for her London restaurant “Hélène Darroze at The Connaught”, within The Connaught Hotel.

In 2008, the legendary Connaught Hotel in prestigious Mayfair, was searching for a French chef to run its kitchen and reconnect with the tradition of French cuisine and turned to Hélène Darroze who took up the challenge and responsibility. It was awarded its first Michelin star in 2009, six months after opening and a second in 2011.

Speaking after the ceremony, Hélène said: “It is with immense emotion and honour that I receive this award. My first thoughts are with my teams, especially Kirk Whittle, my Pastry accomplice for the last 17 years, Executive Chef Marco Zampese and Restaurant Manager Mirko Benzo, who have been working with me at The Connaught for over 8 years. My thoughts also go out to Paddy McKillen, co-owner of The Connaught, who has trusted me to take the reins of the gourmet restaurant since 2008. My appreciation particularly goes to the small suppliers who have helped us, especially the wonderful and emerging British producers, without whom good cooking would not be possible and need support at this time. I am also particularly proud to receive this award alongside my friend Chef Clare Smyth.

Believe in your dreams – everything is possible, and stay true to your femininity!”

Flexibility is the new...