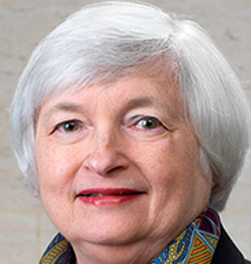 This week, Vice President Kamala D. Harris administered the oath of office to Janet L. Yellen as 78th Secretary of the United States Department of the Treasury.

Secretary Yellen is the first woman to lead the U.S. Department of the Treasury in its 231-year history, and the first person to have ever served as Treasury Secretary, Chair of the Council of Economic Advisors, and Chair of the Federal Reserve.

Secretary Yellen is a strong, crisis-tested leader. In a message sent to 84,000 public servants of the Department on Day One of Office, Secretary Yellen wrote that: “It’s an incredible honor to join this team of 84,000 public servants. I can’t overstate that.”  She went on to describe how: “The pandemic has wrought wholesale devastation on the economy. Entire industries have paused their work. Sixteen million Americans are still relying on unemployment insurance. Food bank shelves are going empty…. We must help the American people endure the final months of this pandemic by making sure they have roofs over their head and food on the table. Then, we must assist them in getting back to work safely.”

Secretary Yellen made reference to President Biden’s ‘four historic crises’  – “COVID-19 is one. But in addition to the pandemic, the country is also facing a climate crisis, a crisis of systemic racism, and an economic crisis that has been building for fifty years.”

“economic policy can be a potent tool to improve society. We can – and should – use it to address inequality, racism, and climate change.”