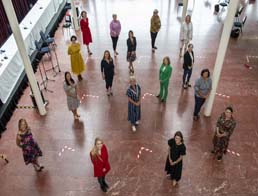 Cork County Council has launched a campaign to highlight the critical role diversity and inclusion have to play in local government. As part of this campaign, the Council are calling on women, people of all backgrounds and minority groups throughout Cork County to consider stepping into the ring to encourage, support and facilitate greater representation in local politics, so as to reflect the diversity that exists in our society.

The drive for diversity in local government is being championed by the current female Mayor of the County of Cork, Cllr Mary Linehan Foley, who is the third woman to hold the role in 100 years. Having achieved a senior leadership role in Irish local government, Cllr Linehan Foley hopes to inspire that ambition in others.

While the 2019 Local Elections resulted in the highest proportion of female Councillors – 226 nationally; Cork County Council say representation is still well below par at just 24% of the overall number of Councillors.

Mayor Linehan Foley explained: “In recent years, we have seen considerable improvements across the board, but we have yet not fully reached the 2019 target of a 30% proportion of women candidates. In our region, we have been faring slightly better than others – in the south west constituency, 22.7% of seats were taken by women in the 2019 local elections. But we must make greater strides and it is important that we all play our part.

Central to the goal of building and maintaining a sustainable democracy is ensuring the active participation of women and the representation of all groups across the board, whether in politics, business or education. This is not just a number to be achieved, it’s a standard to reach and uphold, to properly reflect the needs of our society. There are so many opportunities for women, and minorities of all backgrounds, to get involved in political life, and as a county, we have a wealth of education, ideas, and energy that needs to be harnessed for the betterment of all our communities.”

As part of the campaign initiative, Cork County Council has launched a video featuring the insights of the Mayor of the County of Cork, Cllr. Mary Linehan Foley, Cllr. John Paul O’Shea, Cllr. Danielle Twomey, Cllr. Katie Murphy, Cllr. Gobnait Moynihan and Cllr. Patrick Gerard Murphy.  In the video, Councillors share their stories about how they became involved in politics, what they have gained from community, personal perspectives and the importance of increased diversity in local government.

“I want this campaign to inspire people to take a step towards local politics. Each of us has the power to influence change – we need to hear the voices of those that are under- represented to ensure equality, diversity and inclusion. The best time to do this was 20 years ago, the next best time is now!” Mayor Linehan Foley

Fifteen women entrepreneurs supported by the...