Posted In: At the Cutting Edge 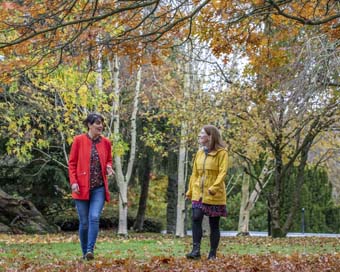 “This Fellowship is unique as it promotes intellectual freedom and independence in early career researchers and it facilitates the work-science-life balance that women often have to juggle.” Dr. Lynette Keeney

The RS-SFI University Research Fellowship scheme gives early career researchers a generous timeframe to develop their own research field and build their careers at a time when many are often also starting their families. This is especially pertinent for female researchers.

According to a US study, more than 40% of women with full-time jobs in science leave the sector or choose part time work after having their first child. Only 23% of fathers make similar changes.

Dr Keeney and Dr Scanlan are both at similar stages of their careers and have developed a great friendship over the past five years, despite their disparate research areas and busy lives with young families. They have also built a network with other fellows nationally who support one another’s professional and personal goals.

Dr Lynette Keeney, RS-SFI University Research Fellow at Tyndall National Institute, studies multiferroic materials for nanoscale data storage, working towards a paradigm shift in memory technologies. Existing data storage solutions, based on either electric or magnetic information stored separately in single-bit devices, are already struggling to match the demand for data. The remarkable growth of the internet means that by 2025, the data created worldwide will be equal to a stack of DVDs that could reach the moon 23 times or circle Earth 222 times! Considering this, it is now widely appreciated that technologies that can simultaneously combine electric and magnetic storage will permit up to an eight-times increase in the amount of information that can be stored. Dr. Keeney is working on the materials needed for this technology – multiferroics which work at room temperatures. If successful, it could change the way memory and data storage technologies are created.

“The RS-SFI Fellowship is laudable because it funds individuals who are passionate about science but also recognises that many of us have caring responsibilities outside of science,” explained Dr Keeney.

“Pauline and I had both just had our first babies when we were at interview stage for the award and the Royal Society accommodated on-line interviews rather than having us travel to London. Both Pauline and I had our second babies during the course of our project, where we were allowed pause our project during our maternity leave term. Not all funders are as accommodating as this.”

Dr Pauline Scanlan, RS-SFI University Research Fellow at APC Microbiome Ireland SFI Research Centre, studies the ecology and evolution of microbial populations in the human gut. Although we know that the gut microbiota plays a pivotal role in human health and disease we know very little about how members of this community interact and evolve over time, and in turn, how microbial evolution within the human body affects host health. More specifically, Dr Scanlan’s fellowship is focused on understanding how bacteriophages (viruses that kill bacteria) shape the evolution of their bacterial hosts and aims to provide a fundamental insight into the origins of microbial diversity in the human gut.

“The grant has provided me with complete intellectual freedom and independence to pursue my research goals. It is a dream come through for me.” Dr Pauline Scanlan

“Most grants for early stage researchers are for 2-3 years and it often takes considerably longer than this to collect samples and generate data suitable for publication.  The prestige associated with the fellowship award helps with CV building and was key to me securing a permanent lectureship that I can take up in the School of Microbiology after my fellowship.”

Dr Scanlan added: “The Royal Society pays special attention to individual researchers and their careers; they have invested in us and thus they want to see us do well and are willing to support us any way they can.” Dr Keeney agreed, saying “Whether this is facilitating maternity leave, flexible working hours or working part-time when your family are young, the Royal Society ensures fellow’s host institutions provide the appropriate support and infrastructure for early career researchers to achieve work-life balance.”

Both Dr Keeney and Dr Scanlan are role models and ambassadors for future females in STEM.  They want to make a difference and currently participate in many educational and public engagement activities such as hosting transition year and other students in their labs, primary school visits (virtually in 2020!), giving career talks, acting as mentors, providing guidance to students for BT Young Scientist & Technology Exhibition projects but also through their day to day interactions with students, and other trainee researchers. If you can’t see it, you can’t be it!

Professor Mark Ferguson, Director General of Science Foundation Ireland and Chief Scientific Adviser to the Government of Ireland, welcomed the appointment, saying: “I am delighted to congratulate Dr Keeney and Dr Scanlan on their prestigious Royal Society-Science Foundation Ireland University Research Fellowships, which recognises their achievements as outstanding early career researchers competing alongside the best in the world. Science Foundation Ireland is dedicated to developing a world-leading, open and diverse research culture in Ireland to ensure that outstanding talent is recognised. Gender diversity is a key element of successful research and innovation. We are delighted to continue to support this international programme, and I wish both awardees every success in their careers.”

Also commenting, Professor Anita R. Maguire, Vice President for Research & Innovation, UCC, said: “Sincere congratulations to both Dr Lynette Keeney and Dr Pauline Scanlan on their second awards of prestigious Royal Society- SFI University Research Fellowships, acknowledging their excellence in strategically important fields of research. In addition to enabling them and their research teams to continue to enhance their research over the coming years, these awards have further highlighted the key role Lynette and Pauline play as tremendous role models for early career researchers.”

At the Cutting Edge: Next

Atlantic Bridge, one of Europe’s top...