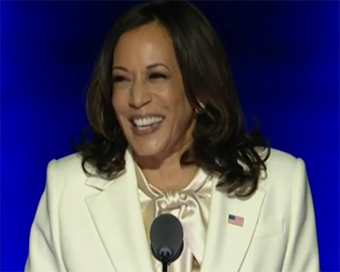 In her victory speech on Saturday 7th November, a beaming Kamala Harris paid tribute to one of her most important role models – her mother, Shyamala Gopalan Harris, who at the young age of 19 arrived in America from India.  And although ‘”Maybe she didn’t quite imagine this moment”, said Harris, “she believed so deeply in an America where a moment like this is possible”’.

The election of Harris as Vice-President of the United States of America places her in the second most powerful position, next only to Joe Biden, President-elect, whom she describes as “…a healer, a uniter. A tested and steady hand.”

With a solid track record this milestone shows just how determined Harris is at breaking barriers – She becomes the first woman, first black and first Asian American Vice President-Elect. She was the first Black woman to serve as Attorney General in the state of California and as a member of the Senate, she was only the second Black woman in history to serve in the chamber.

“But while I may be the first woman in this office, I will not be the last,” Harris said. “Because every little girl watching tonight sees that this is a country of possibilities.”

Harris in her speech pays tribute, in particular, to the generations of women who have fought for equality and the right to be heard. “All the women who worked to secure and protect the right to vote for over a century: 100 years ago with the 19th Amendment, 55 years ago with the Voting Rights Act, and now, in 2020, with a new generation of women in our country who cast their ballots and continued the fight for their fundamental right to vote and be heard. Tonight, I reflect on their struggle, their determination and the strength of their vision — to see what can be unburdened by what has been — I stand on their shoulders”, she acknowledged.

And after a gruelling number of months on the campaign trail, Harris is keen for the real work to begin: “The hard work. The necessary work. The good work. The essential work to save lives and beat this pandemic. To rebuild our economy so it works for working people. To root out systemic racism in our justice system and society. To combat the climate crisis. To unite our country and heal the soul of our nation. The road ahead will not be easy. But America is ready. And so are Joe and I”.

Call Open for New Cycle of...