The Index uses a scale of 1 to 100, where 1 is for total inequality and 100 is for total equality.  The scores are based on the gaps between women and men and levels of achievement in six core domains – work, money, knowledge, time, power and health – and their subdomains. Two additional domains are included in the Index but do not have an impact on the final score.

The domain of intersecting inequalities highlights how gender inequalities manifest in combination with age, (dis)ability, country of birth, education and family type. The domain of violence against women measures and analyses women’s experiences of violence. The Index is composed of 31 indicators.

Measuring gender equality is integral to effective policymaking in the EU. Since the first edition in 2013, the Gender Equality Index has tracked and reported progress by providing a comprehensive measure of gender equality, tailored to fit the EU’s policy goals. It reveals both progress and setbacks, and explores what can be done better to seize opportunities for change.

According to the most recent report released in late October, with a score of 67.9 out of 100, the EU is at least 60 years away from reaching complete gender equality. EIGE’s Gender Equality Index shows that advances in gender equality are still moving at a snail’s pace, with an average improvement of just half a point each year. 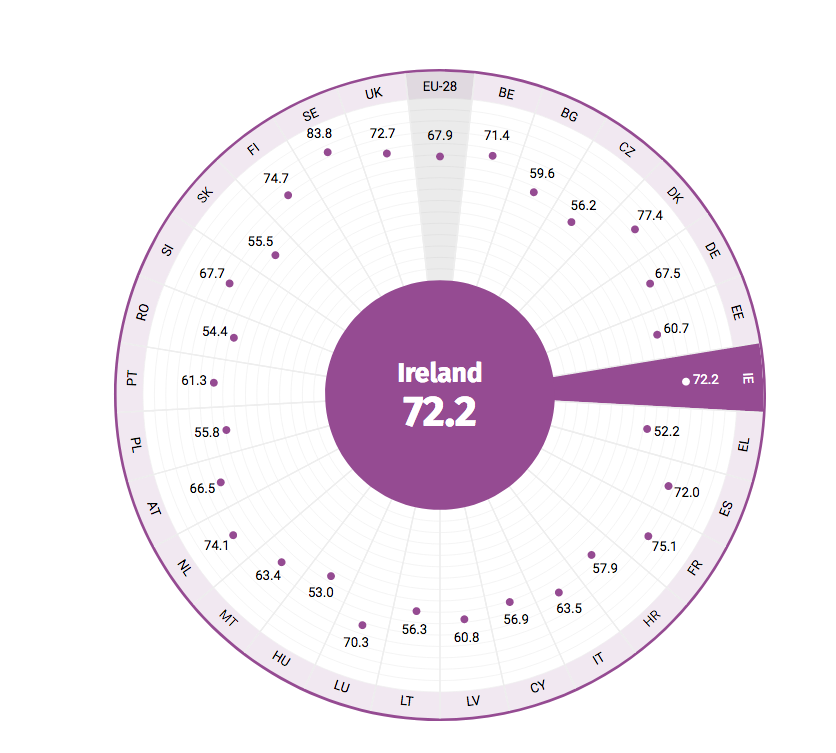 Our score is highest in the domain of health (91.3 points), in which the country ranks 5th. Its second highest score is in the domain of money (86.5 points), rank­ing 8th among all countries. However, gender inequalities are most pronounced in the do­main of power (55.8 points). That said, Ireland is among the better-performing coun­tries in this domain (ranking 10th).

In Ireland Women’s participation in social decision-making is among the highest in the EU. We have reached gender parity when it comes to wom­en board members of publicly owned broadcasting organi­sations.  Unfortunately this trend is not mirrored across other sectors (private or public).

From tomorrow (November 9th), women in...

The Citizens’ Assembly on Gender Equality...