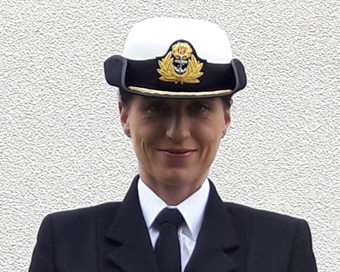 Earlier this month (Sept 3rd), Roberta O’Brien was promoted to Commander and is the first woman in the history of the Naval Service to achieve the rank.

A native of Tipperary, Commander O’Brien joined the Permanent Defence Forces in 1995 and was part of the first ever intake of female personnel into the Irish Navy along with her class mate Orlaith Gallagher (now Lieutenant Commander). She was commissioned as an Officer in 1997.

Commander O’Brien has held a wide variety of roles and appointments at sea and ashore including that of a Senior Staff Officer in Naval Headquarters, Health & Safety Advisor and Cadet Class Officer. Most recently she was the 2nd in command of the Naval Service’s Logistics Unit.

In 2008 Commander Roberta O’Brien become the first female captain of an Irish Warship when she assumed command of the LÉ Aisling. Since then seven women have gone on to command ships in the Irish Navy and in 2019 three ships (out of the 9) were concurrently commanded by women.

Commander O’Brien has also held appoints at sea as the Executive Officer and second in command of LÉ Emer and in 2002 was the Navigation Officer onboard LÉ Niamh when the ship was deployed on it’s historic mission to the Far East as part of the Irish government’s overseas trade promotion strategy visiting Hong Kong, Incheon, Shanghai, Tokyo and Penang over a four-month period.

Commander O’Brien is a mother of three young children and her husband, Peadar Ó Catháin, is a Lieutenant Colonel in the Irish Army currently posted to EU military staff headquarters in Brussels.