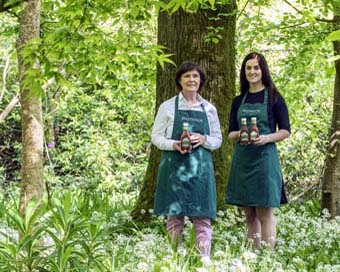 One of Ireland’s most celebrated brands, Ballymaloe Foods is celebrating 30 years in business this month.

As part of the celebrations Ballymaloe Foods commissioned artist Fatti Burke to design special labels for their 30th Anniversary jars. The company is also planning a gift for its customers for the 30th anniversary by adding 30% more to jars of Ballymaloe Original Relish.

Ballymaloe Foods was established by Yasmin Hyde, the daughter of Myrtle Allen 30 years ago this year. Myrtle established a country house hotel and restaurant at Ballymaloe in the 1960s and it was here she developed her now famous, Original Relish recipe. In 1990, Yasmin decided to start Ballymaloe Foods from her kitchen.

Yasmin Hyde said: “We are delighted to be celebrating 30 years in business this year. Nothing happened overnight for us but we worked hard and gradually grew the business into what it is today. Times may have changed but our approach never did. We produce good quality foods, using traditional methods in small batches.”

“We have had fantastic support over the years. We first started selling to local stores and then one of our first big customers was the old Roches Stores in Cork who allowed me to display the relish on their shelf free of charge.”

The General Manager of Ballymaloe Foods today is Yasmin’s daughter, Maxine. Today the company has 33 staff and 18 products and exports into the UK, Germany, the Netherlands, Australia and the US.

A new study has found that Millennials are...

Irish Girl Guides is shooting for the stars...