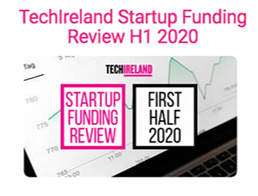 TechIreland has released its H1 2020 Startup Funding Review – a report that includes Venture Capital, Grants and other funding raised by tech startups across Ireland and Northern Ireland.

Between January and June of this year, startups raised €545 Million in funding – the highest recorded in the last 4 years.  “While that is up 25% compared to H1 2019, the headline conceals some very worrying trends’’, says veteran investor and serial entrepreneur Brian Caulfied. ‘‘The number of companies raising funds declined by over 20% and the number of companies raising investment for the first time fell by almost 60%. There is also clear evidence that early-stage companies are finding it particularly difficult to raise funding with just 3 companies founded since 2019 raising just €340K’’.

TechIreland’s CEO John O’Dea explains, ‘‘the overall figure is distorted by three very large investments into Fenergo, Let’s Get Checked and ALX Oncology, which between them add up to €237M, more than 40% of the overall funding’’.

There is a drop in the number of rounds across sectors, especially in FinTech. However, ‘‘FinTech remains extremely investable’’ says Mike Brennan of Finch Capital; ‘‘there are better times ahead and post-crisis, we expect surging demand from financial institutions for technology to master digital-only interaction, enabled by AI and big-data analytics where Ireland is well placed to benefit”.  Investment held up surprisingly well for Travel-Tech and Entertainment/Sport, these are sectors that have been hard hit by the pandemic. Some of these were internal rounds, “covid notes” to keep the lights on in these challenging times”.

Looking to the future, Niall McEvoy of Enterprise Ireland said the second half of the year is “likely to be challenging for companies and investors alike as the funding market reacts to the Covid-19 economic shock. But Enterprise Ireland continues to be the largest seed-stage investor in Europe.  This year to date we have invested in similar numbers of new High Potential Start-Ups (HPSUs) compared to the same period last year.’’

While she welcomed the July Stimulus, Sarah Jane Larkin of the Irish Venture Capital Association cautioned, ‘‘Experience from the last recession shows that, in addition to a reduced rate of VC funding, other investors tend to step back during times of uncertainty. That is particularly perilous for vulnerable tech startups.  Now is not the time to be stepping back. There is an urgent need for short term incentives in CGT rates and the EIIS scheme to encourage the continued flow of private investment to innovative firms’’.

In terms of regional spread, there was a slight drop in funding into companies outside Dublin, but Cork was a notable exception.  Eight Cork-based startups raised a total of €88M in the first half of this year, up from €37M into 5 startups last year.

While Dublin saw an increase in funding raised, the number of investment rounds dropped by 27% compared to last year.

Funding in Northern Ireland halved from €25M in H1 2019 to €12M this year. ‘‘Investment is still concentrated in Belfast with little of note in the rest of the province’’, says Mary McKenna – Angel Investor from Northern Ireland. ‘‘Of the ten N. Ireland startups that raised investment this period, only 4 raised more than €1M and only two have a female on the founding team’’.

A bright spot in an otherwise fairly bleak picture was female founder funding, an issue that TechIreland has been promoting since their €100M Campaign in 2018.

So far this year, sixteen women-led companies raised €60M, up 40% on last year and three times the €19M raised in H1 2018. While this still represents just 12% of total funding, it compares well with the best international results.

”€60M is a solid number for female funding raised in H1 2020 and it’s great to see, even if more than half is attributable to only two companies – Avectas and SilverCloud Health.  Bottom line; we need to see more female founders in Ireland and more funding for them – from pre-seed to series A,B,C. Tracking this progression, as TechIreland is doing with these H1 numbers, is a good start” said Niamh Bushnell of SoapBox Labs.

This week 29 young entrepreneurs were...