First Woman Appointed as President of the High Court 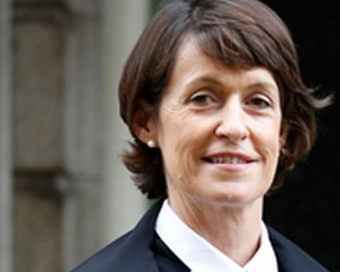 The Law Society of Ireland has warmly welcomed the nomination of the new President of the High Court, Ms Justice Mary Irvine, the first woman to be appointed to this role. Speaking after the announcement (Friday 12 June 2020), Law Society President Michele O’ Boyle said, “I welcome in the warmest of terms this nomination of Ms Justice Mary Irvine both as an outstandingly able judge and as the first woman in history to hold this absolutely key role in the Irish judiciary.”

“She will bring the qualities of independence, deep legal knowledge and insight that have characterised her distinguished career as a judge.”

Justice Irvine was appointed a judge of the Supreme Court in 2019.

A non-statutory advisory committee was established to assist with identifying eligible and qualified persons, including from among serving judges, who were interested in the post.

The committee made recommendations to the Minister for Justice and Equality on preferred candidates.

The members of the advisory committee were:

•Justice George Birmingham, President of the Court of Appeal (substituting for the Chief Justice),

Justice Irvine was born in Dublin and educated at the convent of the Sacred Heart, Mount Anville, University College Dublin and the Honourable Society of King’s Inns.

She was called to the Bar of Ireland in 1978 and to the Inner Bar in 1996. As a member of the Inner Bar, she specialised in medical law and was the legal assessor to the Fitness to Practice Committees of both the Medical Council and An Bord Altranais.

Justice Irvine was also elected to the Bar Council and served as Secretary to the Council. In 2004, she was elected a Bencher of the Honourable Society of King’s Inns.

Justice Irvine was appointed a judge of the High Court in 2007.

As a judge of the High Court, she was in charge of the Personal Injuries list from 2009 to 2014 and was responsible for the management and determination of all Garda Compensation claims.

Following the retirement of Justice John Quirke, she chaired the Working Group on Medical Negligence and Periodic Payments established by the President of the High Court in 2010 to examine the system within the courts for the management of claims for damages arising out of alleged medical negligence and to identify shortcomings in that system.
On its establishment in 2014, Justice Irvine was appointed a judge of the Court of Appeal.

In 2018, she was appointed to chair the Cervical Check Tribunal established by the Government to hear and determine claims made outside of the court process arising from acts of negligence on the part of Cervical Check as provided for in the Cervical Tribunal Act 2019.

The 2019 Women in Leadership annual report...

Green Team Network, an initiative to...