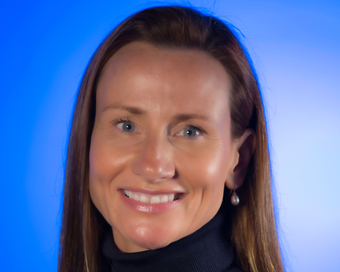 “In the midst of the crisis, what we need to continue to do is remain focused on the things that are within our control – our relationships with each other, our clients and the work that we produce”.

Fiona Egan had always wanted to be an accountant like her Dad – but almost as soon as she started to work as one, she realised it wasn’t for her.

Now in her forties, and Managing Director at Rabobank Dublin, Fiona recalls how a rapid switch into corporate finance was just the ticket: “My father was an accountant; he was head of finance in the ESB, and I had always wanted to be an accountant.”

After a BComm in UCD followed by a Master’s in accountancy at the Smurfit Business school and a period of training with the prestigious firm KPMG, the twenty-something experienced an unexpected and unsettling revelation: “I’d always wanted to be an accountant until I starting working as one! I found the work to be repetitive and lacking in variety and not giving me any energy,” she recalls. “When you’re young, you think you want to do something – but you don’t know what you really want to do until you experience it.”

Accountancy, it seemed, was not for her – but the area of corporate finance possibly was –
“I had always had it at the back of my mind, but this was the 1990’s and Ireland was quite depressed.” However, after spotting an advertisement for an associate in Goodbody Corporate Finance, part of Goodbody Stockbrokers, she applied for the job, and was hired.
“I was in my early to mid-twenties at the time, and I realised that I had absolutely found my niche! “The work was very varied; no two days were the same.  I worked on a lot of exciting deals and really enjoyed it,” Fiona says, adding that after about seven years she moved to Rabobank around 2004 as a Senior Relationships Manager in the corporate banking sector.

“I wanted a change and corporate banking interested me,” she says and that she was particularly attracted to the potential of working in an international bank for the experience. “I felt there would be more breadth of experience open to me and that held true.” The new job gave her a strong insight into global finance and a few years later she was promoted, first to Head of Corporate Banking in Ireland and then deputy Head for Europe for global corporate clients: “I had a European mandate; we were in eight countries around Europe and it was a big role,” she recalls, adding that she worked in that capacity until her appointment last year as Managing Director of Rabobank Ireland.

Mentorship was very important to her career, she recalls: “I learned a lot from my bosses over the years, and the best bosses were in Rabobank. I had a bunch of mentors here; females and males, who have been key to my success – they were supporters of mine who helped me navigate difficult situations and have had my back. I’d recommend finding a mentor. It’s very important when you’re starting out on a career to have someone you can have a conversation with, someone who is supportive when opportunities come up.”

Something that struck her forcibly when she began working with Rabobank was the way its culture was so different to the norm in Irish banking circles: “Everyone was equal. It was a flat structure.”  Rabobank’s lack of a traditional, strongly hierarchical structure resulted in a more empowered workforce, she recalls: “There is no micro-managing, which I find very empowering,” she says, adding that there was a strong and very genuine belief in the promotion of women within the bank’s workforce: “When we talk about gender diversity I believe the Dutch are at the forefront. Ireland, in my opinion is in the Dark Ages!”

When I came back from maternity leave after my first child, my boss asked if I wanted to go to a four-day week.” When Fiona turned down the offer, her boss explained that in Holland working mothers are not expected to work a five-day week: “I was so impressed by the way that they were going out of their way to accommodate me! I didn’t take them up on it but I did work from home one day a week. That was available to me 12 years ago and in a really positive way; I remember thinking this is so nice! I am being supported as a mother rather than being made to feel guilty about it!” The bank offered a very positive and empowering culture which, she says, motivates her to work really hard for the company.

Of course in recent months, working from home has become the new norm for so many across the island during this pandemic. And feeling connected is more important than ever as we negotiate our way through unchartered waters. “The Covid-19 pandemic is causing unpredictable changes to our lives, businesses, outlook and behaviours”, says Fiona. “The new imperative for business is that brands must do more to help society and this will only continue to build. In the midst of the crisis, what we need to continue to do is remain focused on the things that are within our control – our relationships with each other, our clients and the work that we produce.”

Fiona also highlights the need to keep channels of communication open at this time: “Communication is also key, both the form it takes and what to communicate, in order to make sure that people feel connected, whilst they are physically disconnected, but also to reduce uncertainty and unnecessary anxiety.  The supportive, selfless mindset that has led to some fantastic partnerships and collaborations, will be the very progressive, growth mindsets that we will need to re-boot our economy in the post Covid-19 world.”

“ Stay positive and know that we are going to come out of this.”

Mama Nagi’s, a range of award-winning...