Balance for Better Business – a Challenge but not Impossible! 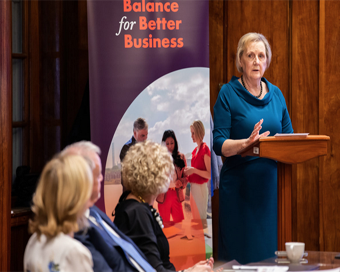 The percentage of women on listed company boards in Ireland continues to improve as Irish businesses narrow the gap on their EU peers, new data recently released from Balance for Better Business shows.

The statistics from the Government-sponsored, business led initiative tasked with examining the gender mix at the top of Irish business reveals that while heartening progress is being made, 11 all-male boards remain, with one all-male board now among the ISEQ 20.

Commenting on the latest data, Co-Chair Brid Horan said: “While we are pleased with the continued progress on the quest for greater balance,  one change that would really move the dial is for every company to appoint an additional woman, and in particular, we call again on those companies with all-male boards to appoint at least one woman. It is disappointing to see that we still have so many companies who do not see this as a priority given the clearly established business benefits.”

Gary Kennedy, Co-Chair said: “The overall percentage increase is positive but what is particularly encouraging is that a third of boards now have three or more females amongst their ranks. The impressive appointments that have been made recently will surely act as an example for more Irish companies to improve the gender balance of their boards.”

The increase in recent months has seen Ireland move up to 15th position from 17th on the most recent list of Women on Company boards for the Largest Companies in the EU. As of October 2019, Ireland was just 2.8 percentage points behind the average for the EU-28 (which was 28.8%) compared with a gap of 8 percentage points in 2018.

Despite the positives, however, there remain 11 all-male boards among all listed companies, four of which have appointed new Non-Executive Directors since September 2019, all of whom were male.

WIB Step Up for #EachisEqual...