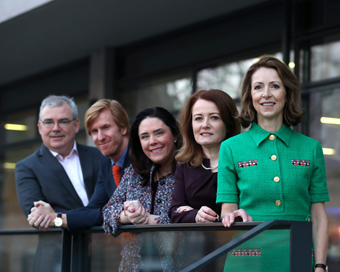 The commitment of Irish business to taking concrete measures to promote gender diversity and inclusion has grown substantially over the last five years, according to new research published by the 30% Club.

The research report – Women in Management – was presented to over 200 senior business leaders at Dublin Castle at the annual Chairs and CEOs event hosted by the 30% Club Ireland.

Speakers at the event included Dame Helena Morrissey (founder of the 30% Club); Anita Sands (Director of three Silicon Valley companies and campaigner for the advancement of women); and Anne O’Leary (CEO of Vodafone). The theme of the event was Changing Culture to Drive Progress.

In particular, the prevalence of modern workplace supports and better management around family absence has grown since 2015. Policies and supports that have become more popular include top ups for maternity leave, top ups for paternity leave, and agile working programmes.

For organisations more advanced in their diversity journey there has been the addition of initiatives such as maternity coaching, employee resource networks, formal mentoring/sponsorship/career progression programmes for women and career returner programmes.  The setting of gender targets is still rare and was evidenced by less than 20% of respondents, but there is progress in the use of measurement to track better balance within recruitment, performance and salary processes.

The research, led by 30% Club Steering Committee member Anne Marie Taylor, was conducted late last year and represents the views of 350 organisations of various sizes, activities and locations.  This is the final report of a five-year series of reports by the 30% Club on women in management.  The 30% Club partnered with IBEC and DCU to conduct the survey.

Within the organisations surveyed 48% believe opportunities for women within their organisations have improved in the past five years.  However 46% believe they stayed the same.

Women continue to make inroads into the management hierarchy, with percentages of women at all levels increasing since 2015.  The 30% Club data from 2015-2018 show the number of women in the lower levels of management increased from 30% to 45% over that period; the proportion at executive director level rose from 23% to 30%, and at CEO level from 14% to 18%. “While these changes are welcome, it is clear that while women are doing better at lower management levels, progress at the higher levels remains hard to change,” according to Rachel Hussey, Chair of the 30% Club Ireland.

Recruitment and retention are the key areas of focus across all respondents with some 43% say they are now tracking the language of job descriptions and advertisements for gender bias, compared to 12% five years ago.

Flexible start and finish times are available in 88% of organisations surveyed, with part-time work available in 80%.  Working from home can be availed of in 71%.  “The ability to have more choice and flexibility in work patterns continues to come through our surveys as the key requirement from the workforce, both male and female, and is becoming an essential part of modern work practices”, said Ms Hussey. “However while the data is quite encouraging, it refers only to the availability of such arrangements rather than their take-up.  Flexible working arrangements can be undermined by an organisation’s culture if availing of them is perceived as career limiting, or if the practice is not adopted by senior role models as well”.

The 2019 survey date was compiled in partnership with Ibec. Commenting, Ibec CEO Danny McCoy, said: “There is a clear imperative to achieve greater gender balance and inclusion in the workplace. This latest body of research indicates that while there has been progress in this regard over the last five years, there is still much to do. Ibec is proud to partner with 30% Club Ireland in helping to drive further progress for the good of business and society.”

The research is important evidence of the growing commitment by Irish business to gender balance for improved business outcomes, but it needs to be a template for all.  According to Ms Hussey: “Studies consistently identify a strong association between gender diversity and a range of positive organisational outcomes.  Benefits include increased profitability, improved corporate governance, increased innovation and creativity and higher-quality decisions and problem-solving”, Ms Hussey said.

Brid Horan, Co-Chair of Balance for Better Business – the independent business-led Review Group established by the government to improve gender balance in senior leadership in Ireland – welcomed the research published today by the 30% Club and acknowledges: “While progress is being made, particularly at the lower levels of management, a serious gender imbalance persists at the top level of businesses in Ireland. “Around 18% of new leadership position appointments within listed companies in the last year were female. This proportion will need to be considerably increased to meet the most recent targets set out by Balance for Better Business. We recommend companies aim for at least 50%, until the targets are reached.

“Now is the time for business leaders to take ownership of this issue by developing action plans to secure the benefits of gender balanced leadership by achieving the targets set by Balance for Better Business and to report publicly on their progress.

“We would also urge all company Boards to prioritise the issue of gender balance and to lead by example in relation to their own membership.

The inaugural meeting of the Citizens'...

Seeing the Gender Pay Gap in...

The gender pay gap is real and palpable in...