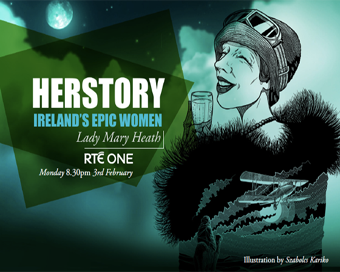 Beginning Monday February 3rd on RTÉ One Television, HERSTORY Ireland’s EPIC Women is a 6 part TV series that tells the stories of some of Ireland’s most remarkable pioneers in the fields of business, science, the arts, aviation, technology, power and revolution:

•Record-setting and daredevil aviator Lady Mary Heath, a Limerick woman of many ‘firsts’ and one of the best known women in the world in the 1920s;

•Groundbreaking computer programmer Kay McNulty, a Donegal Gaeilgeoir who was one of the six original programmers of the ENIAC, the first general-purpose electronic digital computer;

•Pioneering Cork surgeon James Barry, born Margaret Bulkley, who lived as a man, pursued a medical career and whose many achievements include performing the first successful caesarean section in the British Empire in which both mother and baby survived;

•Cork-born activist and union leader Mother Jones (“the most dangerous woman in America”) who founded the Social Democratic Party and helped establish the Industrial Workers of the World;

•Dubliner Oonah Keogh a successful trader and entrepreneur who became the world’s first female member of a Stock Exchange;

HERSTORY Ireland’s Epic Women starts with the story of Lady Mary Heath – Record-breaking aviator and athlete / Campaigner for women’s rights – “Fearless and glamorous in the mid-1920s, a young woman from Limerick, Ireland became one of the most famous women in the world”.

will be officially launched on February 11...