Building Towards More Balance in the Construction Industry 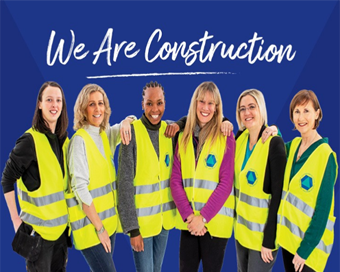 A key part of the Construction Industry Federation’s (CIF) Building Equality campaign, launched two years ago, has been to increase the visibility of women working in construction. This week, the CIF’s Building Equality billboard campaign went live in a number of train stations around Dublin, in advance of International Women’s Day, March 8th.

CIF Communications Director, Shane Dempsey said:  “Our billboards celebrate the women currently building Ireland. They challenge the tired stereotypes around construction. The women featured in the campaign come from across housing, contracting, property development, carpentry, quantity surveying and engineering. It shows the diversity of careers open to all people. In today’s construction industry, you are as likely to be using a computer than a hammer as the industry modernises and evolves.

A key part of our campaign has been to increase the visibility of women in construction as role models to the next generation. Since 2017, we’ve been actively highlighting the fact that there are rewarding careers in construction for women from the building site to the boardroom.”

Shane highlighted the efforts of member companies in addressing gender equality as female participation remains low. A forecast by SOLAS three years ago indicated that 100,000 additional workers were needed to meet Government commitments in housing and infrastructure.  However, since late last year, recruitment growth has plateaued.

CIF’s ‘Building Equality’ campaign was launched to address the chronically low numbers of women in the industry. The billboards feature six women who work in construction across various sectors alongside the line “We Are Construction.”

Their stories are available here>>

The Fun in STEM!

Thermo Fisher Scientific will be creating 36...