Always Believe in Yourself 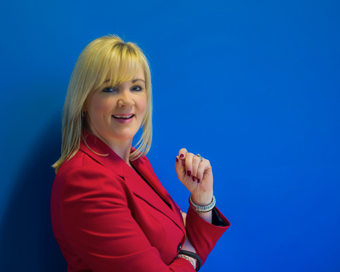 Born into a family of 17 children – fifteen of whom were older than her – and a farmer father who also worked as an auctioneer and county councillor in a bid to maintain his extensive brood, doing business wasn’t just in Louise Phelan’s blood, it was in the very air she breathed.

“People talk about diversity and inclusion – we knew about that many years ago,” quips the 52-year-old Laois native, born second-youngest in a family of nine girls and eight boys, recalling that the inclusive, equal environment in which she grew up meant she never thought she “couldn’t do anything a man could do.”

“Being entrepreneurial was ingrained in us,” recalls Louise who spent more than three decades working in senior roles for corporate giants General Electric and Paypal before joining her brother Pascal’s global energy business Phelan Energy, where she steps into the CEO role on March 1st.

“My mother ran a military operation, making sure we were clothed, educated and that we never went without anything. “My father was a farmer, an auctioneer, a county councillor and sat on many boards. He was a risk taker.

“He always saw opportunities for business, and bought and rented land.

“He saw around corners and was always out there looking at opportunities and taking risks buying things and selling things and making money!

“I’d say we got our entrepreneurial spirit from him and from the family in general; we were breathing it in the air!

“Our diversity of thinking and our entrepreneurial thought process was to do with the family we grew up in, and we learned from the mistakes we made along the way.”

Despite all of this, however, business wasn’t Louise’s first choice of career: “I wanted to be a paediatric nurse,” she recalls, adding however that at the age of 22 and just before her final exams, she took what she describes as “the biggest risk of my life and switched to studying law and economics at DIT.”

The reason – she felt she had become too emotionally involved with the sick children with whom she interacted with as a student nurse.

After graduating from DIT she worked for Mars Ireland as their Collections and Customer Services agent: “This was my first introduction to business and I never looked back.” After a number of years she joined Woodchester Bank which was taken over by General Electric:
“I stayed with GE for 16 years, followed by another 13 with Paypal,” says Louise, who was Paypal’s Vice President of Global Operations, and in the air 80% of the time, when she left the online payments company.

She subsequently took six months out of the workplace, a period over which, she recalls, although she was “offered loads of opportunities similar to what I was doing,” she eventually opted to join the company founded by her older brother Pascal, Phelan Energy, as Group Deputy CEO.

The company’s headquarters are in Dublin and it has a network of overseas offices in Madrid, Spain; Cape Town, South Africa; New Delhi, India; Dhakka, Bangladesh; Sydney, Australia; Toronto, Canada and Hamburg, Germany. The group has invested more than €540M in grid connected solar plants and has a further €135M in projects under construction.

“General Electric and Paypal changed the world,” recalls Louise who won the WMB Businesswoman Award in 2013 – she has, she says, now moved into “another organisation that is changing the world by providing electricity to countries and people that did not have it.”

“Changing the world is what I want to do,” she says, adding that her choice was influenced by her desire to reduce the extent of the travelling she wanted to do, while at the same time she felt “very strongly about the opportunity to work in the family business.”

She’s currently busy setting up a business academy within the Phelan Group: “I want to build an academy so that we can take the younger generation through life learning. “We have 52 nieces and nephews, and this programme will give them and other young entrants to the firm the opportunity to grow up in the family business and set them up for success.

“This is about setting up a family business for success, both by growing the business but also by educating the next generation in the day to day logistics of it – it’s formalising the training. “This academy is for people who want a career with us – it’s like our own internal apprenticeship,” she said, adding that she believed some young people not suited to third level education in their teens may be better off going to work and attending college later in life.

“There’s not just the one way, there’s more than one way to skin a cat!”

One of the most important elements of success, believes Louise, is resilience: “I believe resilience is the key to life for everyone. Having it means you will bend but not break. Resilience is not about life being in a straight line,” she says, adding that in her opinion another strong indicator of success in business as well as in life, is the ability to always have the right attitude: “Life is 10% of what happens to you and 90% is how you react to it,” she says. The correct response to crisis in business or life, is to come up with a plan to mitigate any risks in order to get the best possible outcome.

Next, she believes, it’s important to “stay true to who you are,” “look after your people and your customers,” continually seek out feedback and coaching opportunities and approach every day as a learning day. Last but not least, advises Louise, “always believe in yourself”.

As every business owner knows being your own...