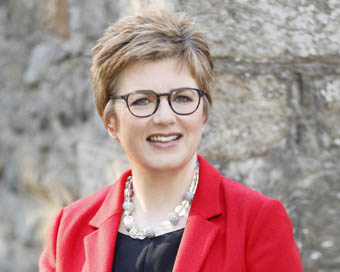 Even a cursory glance at the array of glittering international accolades presented to Margot Slattery would alert the casual observer to the fact that here is not just a formidable businesswoman, but somebody who holds diversity, inclusion and the need to support women in business very close to her heart.

However, the recently appointed Global Chief Diversity Officer with the Sodexo Group (she was Company President in Ireland and Northern Ireland since 2015 before her appointment to the new role last September) is not one to wave her impressive achievements in anybody’s face.

Instead we talk about her humble start in life as a teenage chef, and the reasons why her experience as a gay woman in the repressive, recession-bitten, Ireland of the 80s and 90s drove her to champion diversity and inclusion throughout a long and successful career.

Margot arrived in the workplace as a chef, working her way through a variety of different restaurants and hotels in Ireland, including Adare Manor.  She later moved to the UK to work for the Intercontinental Hotel Group and afterwards travelled through Europe, working in hotels in Germany and Austria. After returning to Ireland in 1990 during the recession, she joined Sodexo in 1991, “at the bottom of the ladder,” she recalls now, with a job “as a junior manager in Dublin.”

She quickly got involved in the training and development programmes run by the company:
“Everyone has an individual training plan and the organisation plans with you about what you want to do and you go on an appropriate development programme.” As part of this philosophy the promising young businesswoman was encouraged to return to college and earn a degree in Hotel and Catering Management, moving ever onwards and upwards: “Over the next 10 years I was on an accelerated plan to raise my management skills while engaging with a number of business development programmes within the organisation,” she recalls. “I became manager of a group of our businesses, then an area supervisor reporting to a senior manager. That involved a number of geographical sites.” As time rolled by the young Limerick woman took on ever more responsibility: “With a company like Dell, for example, we’d provide services across a number of  locations around the country and across areas such as catering, cleaning and facilities management.”

By her thirties, Margot was managing groups on an international basis. And here’s the thing. Throughout all of this, she was a young gay woman who, understandably for a woman in the Ireland of the 1990s, didn’t feel comfortable about coming out about her identity. In fact she didn’t come out as a gay woman in this country until that time: “While I was growing in my career I wasn’t comfortable to be my authentic self. I grew up in the time of Ann Lovett.”  Enough said, for those of that generation.  “Young people now think everything was great back then – but no, it wasn’t,” observes Margot. “It was a terrible society for women.

She became involved in the LGBT movement and volunteered in NGOs of different kinds. As the years passed, Margot slowly began to feel, she says now, that she could not continue to “not say anything any longer.”And, as Irish society inched its way towards a mind-set which was open to the concept of civil partnership and marriage equality, she was asked to become more vocal and visible as a gay woman. And she did: “Sodexo has a Diversity and Inclusion Council in the UK and Ireland and I was leading it from about 2000.  “One of the things I’ve engaged in is a gender network employees resource group. We began to have conversations about why gender might be an issue and looking at it when we were dealing with other companies, and what their gender mix and policies were. “It made us review issues such as maternity leave, paternity and parental leave and policies around flexible working hours and holidays.”

However, despite this work, and despite the positive attitude within her workplace to diversity, it was 2010 or 2011 before she became comfortable enough to talk openly about her identity as a gay woman in Ireland. When she was finally willing to talk about it, she had a warm and welcoming reception: “Society was going through rapid change. Work was incredibly embracing. I found I was telling people that I was gay and nothing bad was happening. “I was continuing to be promoted and people were fantastic. I didn’t have a negative experience in work.”

This interview was first published in our latest annual WMB e-Magazine.

Lisa O’Donoghue’s passion for the...

How many bankers and business leaders are...