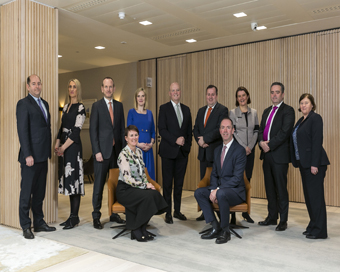 Geraldine Casey has been appointed AIB’s Chief People Officer.  The appointment means that AIB’s executive committee will be gender balanced in 2020.

Before joining AIB, Geraldine was previously People & IT Director and a board executive at Tesco Ireland.

AIB’s CEO Colin Hunt said “I am delighted to welcome Geraldine to AIB as Chief People Officer. Geraldine brings a wealth of experience and her leadership in human resources will support the development of our talent and help our people to be at their best every day. Geraldine’s appointment means that AIB’s executive committee will comprise five men and five women. This level of gender diversity on our most senior management team puts us among the global leaders and I am committed to continuing to support diversity in the workplace.” As well as having 50% of positions on the executive committee occupied by women, AIB was found to have the joint-most gender balanced boardroom in Ireland in the second Balance for Better Business report, with five women on its ten person non-executive board.

Geraldine grew up in Cahersiveen in County Kerry and has a Bachelor of Commerce degree from UCC.  She joined Tesco’s Graduate programme in 2001 and rose through the ranks to become IT & People Director in 2014. In a recent interview with WMB, Geraldine provided the following advice:

“It’s no secret that there are fewer women at the top of global businesses – this could be attributed to women’s own lack of confidence or it could be ‘imposter syndrome’ – the idea that we really shouldn’t be there. It affects women more than it ever does men, so women really need the confidence to stick their neck out.”

Geraldine is a super role model and here at WMB we wish her the very best in her new role as AIB’s Chief People Officer.

* Brendan O’Connor has announced he will step down from the bank later this year.

Concentrate on what you’re doing, be one...

A new leadership programme for women,...