Citizens Assembly on Gender Equality Have Your Say! 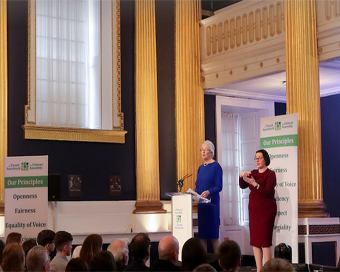 The inaugural meeting of the Citizens’ Assembly on Gender Equality took place last week in Dublin Castle (25th, January 2020). Membership of the Assembly consists of 100 persons, comprising a Chairperson (Catherine Day) and 99 citizens. It will host meetings over the coming six months with their first full weekend session planned for 15th & 16th February in Malahide, Co Dublin.

Dr Catherine Day, former Secretary General of the European Commission, was appointed by the Government to Chair the new Assembly. She also chairs the Governing Body of University College Cork and the Board of Trustees of the Chester Beatty Library. She is on the board of the European Movement Ireland, the Institute of International and European Affairs in Dublin and the Irish Times Trust.

In her opening address, Dr. Day highlighted some of the ‘asks’ which the Oireachtas want the Assembly to consider:

•to prioritise those issues which may include policy, legislative or constitutional change

•while having regard to the legal requirements and the costs versus the potential impact of these proposals.’

She went on to say that “The issues set out by the TDs and Senators in their resolution cover a wide range from:

•challenging the barriers and social ways of behaving that facilitate gender discrimination,

•to looking at where the responsibility for care lies, especially within the family,

•and also scrutinising the structural pay inequalities that result in women being disproportionately represented in low pay sectors.”

Six basic ground rules/principles will be followed by the Assembly at all times during their deliberations according to Dr. Day which include:

“Openness – this means we will work in complete transparency.  All of the public sessions of our meetings will be livestreamed and all the documentation we give you will be available to the public on the Assembly website.  However, our roundtable discussions will be private and will not be livestreamed.

This is followed by Fairness – we will do everything to make sure that the full range of views is heard.  We will also ensure that our briefing material is of the highest quality.

The next is Equality of voice – this means that you are all equal and each one of you will have the same opportunity to express your opinions, if you so wish.

Then comes Efficiency – we have a lot of issues to discuss so we will work to make the best use of our time.  There will be plenty of time for discussion, but I will also move discussions along so that we cover all of the relevant topics.  Any papers for our meetings will be circulated in good time so that you have time to think about them and prepare before our meetings start.

The fifth principle is Respect – we will always work to make sure we have an atmosphere where anyone can freely, and confidently, make their contributions, without fear of personal attack or hostile criticism.

And finally Collegiality – this means we will work together in a spirit of friendship.”

In addition, the Assembly has launched a public consultation process inviting any person or organisation with views on achieving greater gender equality to send them on.  The consultation will be open until Friday 6th, March and details are available on the Assembly’s website here>>

As the modern workplace continues to evolve...

The commitment of Irish business to taking...