Is Hot Desking – A Hot Potato! 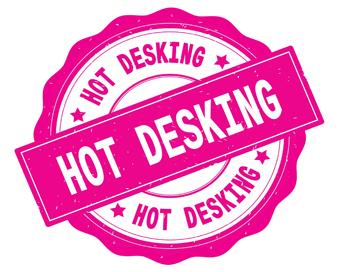 As the modern workplace continues to evolve and trends in flexible and agile working become more mainstream, the practice of hot-desking is on the rise. The system of allocating desks to employees as needed makes optimum use of office space, allowing companies to effectively ‘time share’ desks which would otherwise lie vacant, thereby delivering considerable cost savings.

Research from Vodafone UK found that employers could save more than £5,000 (c€5,900) per desk per year by using hot-desking. Other sources cite a 30% saving on office running costs by introducing the practice. Property specialists Jones Lang LaSalle found that the average worker spends just 40% of their working day at their desk. Companies can reduce their overall office space requirements when desks are shared between part-time, flexible and remote workers or with those who spend time out of the office meeting clients or out on sales trips.

Hot-desking is also more prevalent in specific industries and companies. According to Bernie, hot-desking is popular with tech firms and multinationals, “particularly those that have their EMEA and/or global teams based out of Ireland. These teams will be dealing with customers and internal teams in different time zones often very early or late in the day.”

However, she says practices vary, and some tech firms and multinationals are still very much predisposed to having their workforce present in the office as much as possible, providing enticements such as free meals, gyms, snooker tables, and chill-out zones.

Another benefit of hot desking for employers is strategic. Companies that are rapidly expanding want to make the best use of space – and with office real estate at a premium in Dublin and other cities – hot desking makes sense.

Cities are seeing a huge rise in demand for serviced offices including managed spaces and hot-desking. Shane Duffy of Click Offices says the market has tripled since he set up the serviced office broker four years ago. Clients are looking for flexibility, scalability and simplicity. “We had a company last year that started in January with 10 people, and they now have 200. We’ve taken them through three different serviced office centres. That’s the scalability factor,” says Shane.

As well as providing financial and strategic advantages for employers, workers who use hot-desking could see benefits such as improvements in collaboration and communication. Bernie Keogh says that “in large companies, hot desking can break down silos and promote cross-company social integration, so it is easier to get to know your peers.”  She added that among the many gains for employers to hot-desking and agile working is a reduction in the overall footprint of a business and happier, more productive employees, who can achieve a better work/life balance.

The Europe-wide study of 11,000 office workers carried out across 11 countries revealed that 52% of workers would prefer to spend most of their working hours at a dedicated desk – just 7% expressed a preference for hot desking.

The “What Workers Want: Europe 2019” report acknowledged that “Logging in and out of phones, adjusting desk and chair heights and clearing desks at the end of the day can all limit productivity.”

However, it also stated that “being in a collaborative environment, where workers have the flexibility to work alongside different colleagues and share knowledge will, of course, increase output levels.”

The percentage of workers who said that hot desking had a positive or negative effect on their productivity was almost equal – 31% to 30%, respectively. The results varied across industries and countries. More than half (54%) of workers in Poland, for example, said that hot-desking increased their productivity compared with just 12% of UK workers.

The inaugural meeting of the Citizens'...