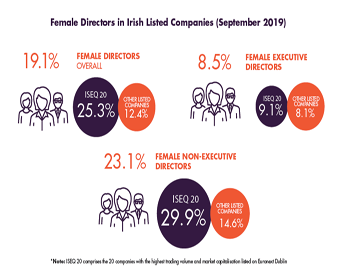 The latest report from the Government established initiative tasked with examining the gender mix at the top of Irish business reveals that while heartening progress is being made, a serious gender imbalance persists at the top level of businesses in Ireland.

Meanwhile, despite a target of no all-male boards listed on Euronext Dublin by the end of 2019 set in May, no change was made by 1 September.

Commenting as the report was launched, Minister of State for Equality, Immigration and Integration, David Stanton, T.D., said: “I am pleased to see that progress is being made but the fact remains that serious gender imbalance persists at the top level of businesses in Ireland. It is heartening to see that the percentage of women on Irish publicly listed Boards has increased overall, but listed companies outside the ISEQ 20 must move swiftly to address the deficit. Likewise, the days of all-male boards must now come to an end. I welcome the fact that Balance for Better Business is extending its analysis to leadership teams as gender-balanced management is needed to realise the full business benefits and achieve real cultural change.”

Gary Kennedy, Co-Chair, Balance for Better Business, said: “It is clear that better gender balance on boards and executive teams leads to improved business outcomes and performance, including profitability and return on equity. This is driven by the more effective use of the entire talent pool, diversity of thinking and innovation, enhanced responsiveness to consumer requirements and improved governance. All businesses should actively adopt a targeted and planned approach, reflecting their strategic objectives and organisational structures.”

Brid Horan, Co-Chair, Balance for Better Business, said: “If Ireland is to continue to succeed as a modern, outward-looking European country, we need to address the challenges and opportunities of moving to gender-balanced leadership. While recent improvements have narrowed the gap between Ireland and the EU average at board level, we continue to be ranked 17 of the EU-28. Balance for Better Business is calling for genuine change and collaborating with those working to support female participation on boards and in executive leadership. It is time to fully utilise the talents, education and experience of all our people.” 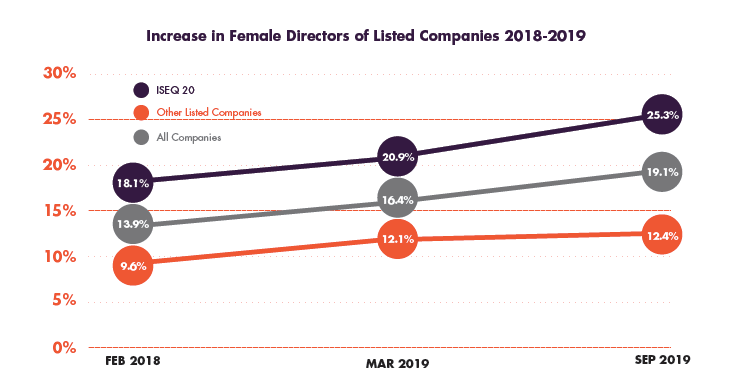 Since the first Balance for Better Business report, the overall percentage of women on Irish publicly listed Boards has increased from 16.4% to 19.1% (based on 1 March and 1 September 2019 data), a further increase from 14% a year earlier.

The new report reveals that, on average, ISEQ 20 companies reached 25.3% female directors by 1 September 2019, achieving the Balance for Better Business interim target (of 25%) set for the end of 2020. However, the report also discloses that virtually no progress has been made among the other listed companies (12.1% on 1 March to 12.4% on 1 September).

Similarly, the report notes that despite a target of no all-male boards listed on Euronext Dublin by the end of 2019 set in May, no change was made by 1 September (Datalex plc appointed a female director in October). Balance for Better Business has re-iterated their call for an immediate end to all-male boards.

In its second report, Balance for Better Business extends its analysis to leadership teams. Currently, over one-third of listed companies have no woman on their leadership team – some one in five ISEQ 20 companies, and almost half of other listed companies. Gender balance at executive leadership team level is needed to realise the full business benefits and achieve real cultural change.  Increasing the number of women on boards could be seen as window-dressing if not accompanied by change at executive level.

New targets set by the group mean that by the end of 2023, the overall average proportion of women on leadership teams in ISEQ 20 companies should be at least 30% (currently 16.9%) and 25% for other listed companies (currently 14.6%).

The new report also extends the group’s focus to private companies. While analysis and monitoring in this sector is constrained by limited data availability, Central Statistics Office analysis from early 2019 indicates that among Irish-owned private companies, 17.1% of board directors are female.  Balance for Better Business sets a target of 30% for these boards by 2023, with interim yearly milestones.

To find out more about the work of ‘Balance for Better Business’, you can visit here>>

It’s all about Targets!

Amid economic uncertainty around Brexit, a...

As the modern workplace continues to evolve...