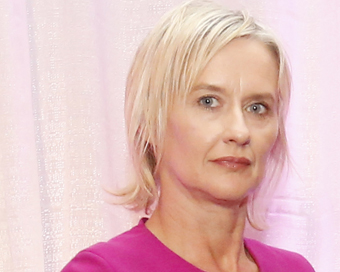 Stress is not a word used by Dolores Madden. Ask her how she juggles a high-pressured job as Marketing Director of Hidden Hearing with raising three children and she insists: “I don’t feel stressed, I feel stretched.

“I can cope with everything by being organised but when something unexpected crops up, that’s when I feel stretched.” So who’s on standby to help her in a crisis? “My husband is the first port of call and if he’s unable to escape work, my best friend Gabrielle is a wonderful support. She has helped me out so often over the years.”

Dolores faces extra pressure on the home front as her 15-year-old son Colin has autism (she is also mum to Eoin, 17, and Ashlee, 12). Indeed, it was her personal experience as the mother of a child with special needs that led to one of her proudest professional achievements. Dolores explains: “I noticed a lot of mums with autistic children give up their careers to become carers. They are very much the unsung heroes of society. Also, on a daily basis, we see customers in our clinics coping with hardship, loss and difficult situations.

“I presented the Hidden Hearing board with the idea of organising an awards ceremony to honour ordinary people who do extraordinary things and in 2011, the first Hidden Hearing Heroes Awards took place, hosted by Gay Byrne. “I’m delighted to say that it continues to be a huge success and we receive hundreds of nominations from the public every year.”

Born and bred in Cork, Dolores admits she “did not have a clue” what she wanted to do after leaving school. “Everyone in my class seemed to be applying for nursing but that wasn’t for me. “I studied Information Technology at the local College of Commerce and my very first job was with Hidden Hearing back in 1988.”

Dolores quite literally started on the shop floor, handling bookings and answering the phone, while studying accounting at night. “Looking back, my favourite subject at school was Economics so I think accounting was a natural choice.” Three years later, she was a qualified accountant and began working in the operations department of Hidden Hearing. “I became Operations Manager but I really believe that upskilling is vital in any workplace and I also missed interacting with customers so studying audiology was a natural stepping stone.”

After graduating as an audiologist, Dolores worked in the Cork branch of Hidden Hearing and recalls: “What I loved most about the job was that moment when you fit a hearing aid and the customer’s joy at hearing properly. “The commission I earned was nice too!” she laughs. In 2002, Hidden Hearing was bought out by the Demant group and the company has gone from strength to strength, with 82 clinics now operating across Ireland. “Professionally, it was an exciting time for me,” says Dolores. “I upskilled again, gaining a Degree in Marketing, and moved back into Operations. I became Marketing Director in 2003 and in 2016, I received an award for being the ‘most valuable player’ globally within the Demant group, amongst 16,000 employees. “I was ecstatic but shocked,” admits Dolores. “I honestly was not expecting to win.”

She reckons her marketing team would describe her management style as “enthusiastic but fair … I like pushing people to be the best they can be.” The Hidden Hearing high-flyer is all too aware of the perils of trying to “have it all”. Dolores believes many working mothers end up exhausted because “we set the bar too high, we are our own worst enemy. We feel we are under-achieving and we don’t support each other enough, either.”

Her top career advice? “Learn as you go along. Always listen. Don’t sweat the small stuff and pick your battles.”

Dolores works four days a week in the office and every Friday from home. Her three children are all in secondary school now but when they were babies, she was lucky enough to have her mum looking after them. “Then, after my daughter was born, I got a childminder to care for all three kids in our own home.”

In addition to her full-time job and parenting role, Dolores sits on the Council for the Irish Society of Hearing Aid Audiologists (ISHAA) and is in the process of starting up a dairy farm business with her husband in 2020. “Farming might appear to be the polar opposite to my day job but actually, both involve strategic planning,” she points out.

“In both cases, you are running a business, albeit with animals instead of people!”

Lisa O’Donoghue’s passion for the...