It Pays to Learn! 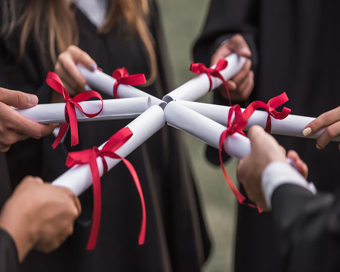 People starting their careers with a bachelor’s university degree earn a maximum average of €31,075 in Ireland, which is 26% more than the €24,608 paid to those who stop their education at secondary school. Willis Towers Watson (NASDAQ:WLTW), a leading global advisory, broking, and solutions company, looked at pay levels across Europe offered to recent graduates who had no relevant work experience.

There was also a lot of variation among types of degree and the average maximum pay of graduates. The research found that having a master’s degree in Ireland led to a maximum average pay of €34,340, an MBA €35,547, and a doctorate €38,786.

April McDonnell, Compensation and Benefits Survey Lead at Willis Towers Watson Ireland, said: “The buoyant jobs market and ready demand for the right skills means there is strong competition for graduates this year. While taking a degree can be a big financial commitment, there is a clear return on that investment. “Pay levels can vary greatly depending on what the role is, and in Ireland we see that jobs in engineering, IT, and law tend to pay the most, while those in marketing, customer service and administration pay the least. The difference between the best and lowest paid roles can be significant, with the best positions paying around 30% more.

“Irish pay rates fall around the middle of the range of the top 20 European economies, although relatively low taxation rates compared with many countries means that Irish first jobbers will take a greater chunk of that pay home.

“Unsurprisingly, more education equals more pay, though the jumps are not so great beyond a bachelor’s degree. The average master’s graduate commands an 11% pay premium over a bachelor’s graduate, while someone with a doctorate gets paid 11% more than those with a master’s degree.”

Dublin Start Up Week ended with the annual...