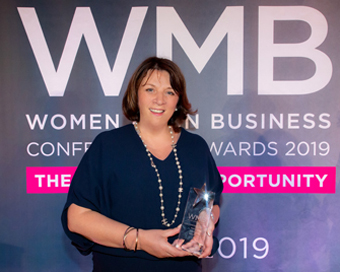 When Eimer Hannon tried to access finance for her fledgling, home-based travel business back in the late nineties, the banks just laughed.

These days Hannon Travel has offices both in Navan and in Northern Ireland, employs nearly 30 people and is one of the most successful firms in the Irish travel sector. “One of my struggles around that time was in accessing finance,” recalls Eimer, Managing Director of what has grown to become a leading corporate travel management firm. “You’d go to the banks and look for a loan and when they heard that a woman had set up a travel agency from home and wanted capital to grow it, they just laughed.”

A few years later, in 2004, when her company was expanding, and she was planning to move her growing firm from the office at her home in Navan, to a new bespoke business premises, something else happened: A male business acquaintance observed that she should just shut up shop: “It was suggested that I close down the company and stay at home and look after my husband and child – to which I said no!  “That was what Ireland was like then!” The man in question, she recalls, was in his sixties: “I was thirty, and he just could not understand how a woman with three small children and a husband with his own business would even consider trying to blaze a trail in business! But she was – and she did!

The eldest of six children, Eimer sat her Leaving Cert in 1986, not sure what she wanted to do with her life. So she did what many others did in those difficult, recessionary years – she trained as a secretary. “I didn’t know what I wanted to do when I left school after I did my Leaving Certificate examination in 1986. So I attended the highly respected secretarial school at Loreto College, Stephen’s Green,” she recalls. Luckily for her, Loreto graduates were much in demand, and once she had qualified, Eimer quickly landed a job with USIT, the national student travel agency, at its offices at University College Dublin.

“It was my first experience of the logistics surrounding travel,” she recalls, adding that she stayed for about eight years, learning everything she could before moving to the corporate travel sector to further improve her skillset – and she says now, basically to “acquire more knowledge about the industry in general.”

“I’ve always had an interest in learning,” she says. She used her time in the corporate travel sector well, attending a variety of courses on everything from Fares and Ticketing to personal development. Three years after she married in 1996, she and her businessman husband Raymond had their first child, Ronan, who is now aged 20: “Around that time my husband had just established a retail business with his brother and was extremely busy,” she recalls.
Once her little bundle of joy had arrived, Eimer recalls, her former work commute, a daily three-hour round-trip, rapidly lost its appeal. And, since back in those days, flexible working hours, working from home or even the option of a part-time working week was unheard of, she never went back.

Instead she followed her gut – and a lightbulb moment which was to change her life.
Eimer knew there was a demand for a corporate travel agency which offered a seamless personal service for travellers, supporting their travel and logistics from the moment of the enquiry to the end of the journey. “I had built up a list of loyal clients over the years, who I felt would continue to use my services.” So in 1999, she started her own highly personalised corporate travel company from home.

Ireland was still in the grip of an excoriating recession, and there was, she acknowledges quite an element of risk in setting up the company. “However, I knew if I didn’t do it then, I’d never do it!” So she went for it. It was an incredibly busy and challenging time – especially when it came to trying to convince the banks to allow her to access finance. “Looking back,” she says now, “it was all a blur!” My husband and I were on parallel tracks setting up new companies at a time of great economic uncertainty.”

However Eimer’s belief that quality customer service was key turned out to be absolutely on the button: “For me it was all about service. I was offering a 24-hour service and clients had immediate access to their travel booker.  “I think we became very successful because we gave customers such a very personalised service. “They had a relationship with us; they had instant access to us so that it was more like a partnership. “Our service offering was the relationship we built with our clients, because when they needed to travel abroad, it wasn’t just about the flight, it was about the journey from the time they left their front door to the time they returned, and we looked after every element of it.”

Crucially, she adds, whenever problems arose for a travelling client, Hannon Travel was there to help: “That was what made us stand out – anyone can book a flight, but when something unexpected crops up or a client needs to make last minute changes we are there. “This was a very different service to what was available in Ireland at that time.  “In other words, company management had peace of mind about their travelling staff!” In 2001, as the company began to thrive steadily, she employed her very first staff member and also discovered she herself was pregnant with twins Sinead and Clodagh, now aged 17!  “My maternity leave lasted for about a week! The company was in an office in my home at the time.”

Three years later, in 2004, she and her staff  moved to what was Hannon Travel’s first proper office based in Navan’s local Enterprise Centre. They stayed for 11 years, until they moved to their current business premises in Navan town: “It was a lovely separation of home and work! There were no distractions,” she quips now.

Over the years Eimer and her team of almost 30 employees have served a diversity of corporate clients from the equestrian, finance, banking, pharma, tech, mining and manufacturing sectors among others. These days, as a highly respected figure in Irish business, Eimer sits on the Irish International Air Transport Association Agency Programme Joint Council and also on the Amadeus Consumer Advisory Board.

Has she got any throw-down-the-ladder tips for young businesspeople? “Listen to your customers, your staff and your suppliers and take on board what they have to say because you need all those three elements on board and on your side in order to build your business,” she advises. On top of that, she prioritises being honest and being available. Last but not least, she counsels, always hire good staff. And remember:

“Sometimes your staff will challenge you and that’s not always a bad thing either.”

Another strong priority for Eimer, is, she says, giving back: “I have a great interest in supporting charities – I’m a firm believer in giving back. I believe life is like a chain and I’ve been very lucky in my area of the chain! I very much feel people were great to give me the support and the breaks that they gave me and I want to give back and support other people.”

In terms of ‘giving back’ in business, Eimer has successfully completed the Female Entrepreneur “Going for Growth” and “Continuing the Momentum” programmes and is actively involved in its prestigious member’s forum which is committed to ongoing development for Irish entrepreneurs. She believes in supporting the next generation of business women and will be mentoring on the Enterprise Ireland supported Acorns Programme with her own set of ‘7 little acorns’, some of whom are just at the idea stage. She’s looking forward to facilitating sessions and working with them, she says, to achieve their dreams.

Outside the travel industry and business world, Eimer takes a keen interest in rugby, hurling, outdoor activities and the equestrian world. She sits on the boards of Navan Racecourse and also of Navan Rugby Club, for which she is the main sponsor.  She is president of Navan Lion’s Club, supports a number of cancer research charities and is a leader in several high-profile national charity initiatives.