Ireland has a Gender Pension Gap of 35% 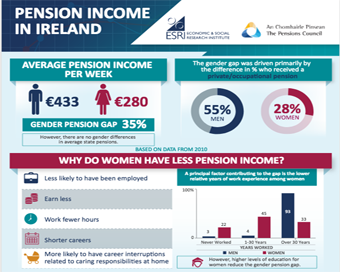 Recent ESRI research funded by the Pensions Council presents new evidence on the gender pension gap in Ireland. Data from the Irish Longitudinal Study on Ageing (TILDA) for 2010 is used to provide the most comprehensive representation of the retired population. The study finds that the average pension income of retired women is 35 per cent lower than that of retired men.

•The analysis finds that the average total weekly pension income in 2010 was €280 for women and €433 for men, indicating a gender pension gap of approximately 35 per cent.

The research also examined the experience of income poverty among the older population in Ireland using data from the Survey of Income and Living Conditions (SILC) for 2015 and 2016.

•There was no gender difference in income poverty. However, women are less likely to receive a contributory pension and among those who do, the average income received is much lower than the average income received by men. This is partly because their partners are likely to receive a qualified adult payment.  It is also because more women receive lower personal rates as a result of less time spent in employment.

The study also reviewed the international evidence on gender differences in key dimensions of financial decision-making (preferences, financial literacy and household decision-making roles), and surveyed the availability of data on these issues in Ireland.

The evidence shows that women are more risk-averse and have poorer numeracy/financial literacy skills than men. For example, using data from TILDA, just 7.5 per cent of women, and 17.2 per cent of men aged 50+ were able to answer correctly three questions on financial literacy.

Jim Murray, Chairman of the Pensions Council welcomed the results of the study as an important contribution to the “detailed understanding of the Irish retirement system that we need to identify what policies are most likely to succeed”.