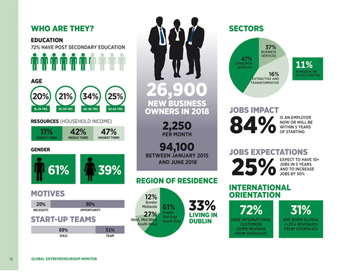 The annual study, which is sponsored by Enterprise Ireland, with the support of the Department of Business, Enterprise and Innovation also found that close to 27,000 people across the country have reported that they were involved in starting a new business last year.

Commenting on the GEM Survey, Heather Humphreys TD, Minister for Business, Enterprise and Innovation said, “Each year, the data obtained through the GEM survey provides a unique and in-depth insight into entrepreneurship, a key focus of our new, whole-of-Government strategy, Future Jobs Ireland. It is heartening to read that the jobs growth expectation of early-stage entrepreneurs in Ireland is ranked first across Europe and against comparator countries. This underlines the strong employment impact that early stage entrepreneurs have in Ireland, where one in five expects to employ 20 or more over the next five years.

“I am particularly pleased by the fact that the gap between the number of male and female entrepreneurs is narrowing and that there has been an increase in the rate of women in Ireland becoming entrepreneurs. Ireland is now ranked 5th highest in Europe in this regard, which is proof that our ongoing efforts in this space are paying off.”

Manager of Policy and Government Relations with Enterprise Ireland, Rowena Dwyer added, “This year’s survey has once again highlighted the considerable global ambition of early stage entrepreneurs in Ireland, with more than one in three expecting to attain a quarter or more of their sales in international markets.

“The United Kingdom’s exit from the European Union is only weeks away which means entrepreneurs and business owners alike are embarking on challenging and uncertain times but as is often the case, challenges can present new opportunities.

“As part of its Brexit preparations, Enterprise Ireland has been extending its full support to early-stage entrepreneurs and start-up businesses to develop and realise their potential to step into new global markets.

“The GEM data tells us that Ireland is above European average in terms of those who aspire to start their own business and who are nascent entrepreneurs. However, the fact that less than 7% of those aged under 25 are entrepreneurs shows that our work must continue for further improvements to be achieved in this regard.

“This is a clear indication that the importance of initiatives such as Enterprise Ireland’s Feasibility Grants and Competitive Start Fund to encourage graduate entrepreneurs to venture into business cannot be overstated.”

Ireland has a Gender Pension...