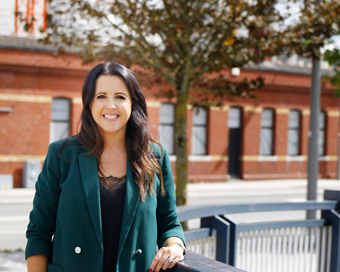 Ask Lisa Callanan about the secret to her success, and her answer is deceptively simple.
Hard work.

There are other reasons for her move up the corporate ladder, but to this day, she says, she enjoys reading CVs which reveal that a young applicant has worked while in college – she herself earned money as a waitress and in clothes shops and boutiques while studying for a bachelor’s degree in Social Science at UCC. It may have been this work in Cork’s business sector which gave her the taste for business – at any rate she later decided to study for a Higher Diploma in Marketing Management.

It was during this course, the 44-year-old recalls now, that the penny dropped in terms of what she wanted to do with her life: “I realised that I really liked business and I saw that this was something I wanted to do.” During a visit to the university’s Careers Office in 1999, Callanan, who has lived in Cork most of her life but is a Dubliner by birth, spotted an advertisement for a Recruitment Consultant at Oxford Global Resources, which today is a renowned international firm specialising in global recruitment for tech and life sciences. Callanan applied for the job and subsequently joined what was then the company’s fledgling seven-strong team in Cork – and never looked back.

The workforce at the company’s Penrose Quay base has since grown to more than 150 and, next September, Callanan who is now VP of European Operations at Oxford’s parent company ASGN, celebrates 20 years with the company. Worldwide, ASGN has over 4,300 employees and generated more than $3.3 billion in sales worldwide in 2018. Based out of Oxford’s European offices on Cork’s Penrose Quay, Callanan oversees the operations of Oxford Global Resources and the ASGN sister companies across Europe. Oxford Global Resources is a long-standing member of the Cork business community ­– last April the company celebrated 25 years of operations in the city (it has also recently celebrated 35 years of business in the USA where it was established in 1984.)

“I was in from the beginning,” recalls Callanan: “It was a huge opportunity for me. I was sourcing and placing on contracts high-end technical IT consultants on our client projects to fills skills gaps and drive successful project outcomes for all of our clients.” In 2008 the company expanded its reach into the life sciences sector and soon afterwards into engineering, expanding both its workforce and its workspace to accommodate its rapidly growing business. “With rapid growth in all three areas of the business, IT, Life Science and engineering, we extended the work-floor and workforce significantly in 2011 and 2014. We added a shared service centre also in Cork in 2015.”

Oxford recently created another 25 new jobs in Cork, where its workforce now stands at 154 ­– the company, which has more than 850 employees across 25 offices worldwide, is headquartered in Massachusetts. Over the last 20 years, Callanan worked her way across a variety of roles to her current position. What’s the secret to her success? Well, she confesses, she has a few:  “Because I was in there from the beginning I always felt responsible; there was such a small team that I always treated the business as if it was my own business and that is the way I work to this day. I take great pride in it and we have grown it from the beginning in Cork. “I also recognise that I’m only as good as the people I have around me. I surround myself with positive people; everyone’s rowing in the same direction. We have a very clear focus as to what we want to achieve.

A crucial key, she says, is to never underestimate the power of sheer hard work. “If you want the success, be prepared to put in the hard work.” Has she got any tips to offer younger women coming up the ladder? “Find a great mentor – that’s definitely one of my big keys to success. “I want to be a good mentor and role model to my team – this is a priority for me.” Next she advises, spot an opportunity and go for it: “Put yourself in the job before getting the job – if responsibility is there, go for it and put your hand up.  “Do the job before you get the job!”

And always be open to change, she urges: “Remember, your business won’t look the same in 10 years – being open to change will help you to grow in your career and in business.”

Last but not least, advises Callanan, don’t forget to celebrate your achievements and those of your staff:  Oxford runs a special recognition programme, The President’s Club, which both recognises and rewards key contributors to the company’s success and celebrates the accomplishments of the overall organization. This year the President’s Club destination is the Grand Velas in Riveria Maya Mexico. “The top performers of any year get to celebrate their success on an all-expenses paid trip with their partners,” Callanan explains. “I love to see people going on this for the first time,” she enthuses: “One of my proudest moments is to see someone who has worked really hard and performed very well being accepted into this programme and winning a President’s Club prize.”

A Berry Interesting Life at...

As a teenager, Valerie Kingston liked...