Leading the way for Women in STEM 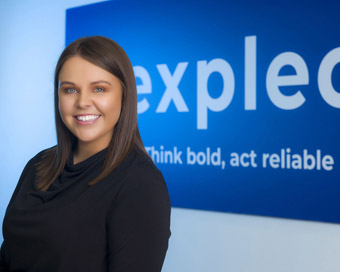 Rebecca Keenan’s meteoric rise from a young graduate to head of a department within a global company represents a win for gender equality.

Rebecca had just completed her degree in Computer Science and Business at Trinity College in 2015 and had a keen interest in digital transformation: “How quickly technology emerges and then gets replaced by the next new thing, whether that be across social media or industry.”

Two years after joining the company, she was appointed as the head of Expleo’s Process Automation, an area which encompasses Robotic Process Automation (RPA.). Recognising the potential for RPA, Rebecca created the methodology and training in this area, which led to her setting up a global centre of excellence in Dublin supporting the roll-out of the service to clients worldwide.

As a young woman in a male-dominated field, Rebecca attributes her success to “a bit of luck,” “hard work” and her “talented team.” She says that process automation is not unlike other sectors of STEM, where female representation isn’t the norm. In her role, she deals with mostly men and admits that she is “often the only woman in the room. I was travelling recently, and I was the only woman in the building that I could find.”

Holding a senior role with a company that has over 500 consultants across multiple disciplines between its offices in Dublin and Belfast, Rebecca sees a responsibility to use her position to help other women in the workplace. However, finding her voice didn’t happen overnight. “I learned to speak up even when it might be uncomfortable. It was about supporting anyone where I could and not just outwardly but also meaning it  on the inside.”

While her male colleagues have been supportive, she emphasises the importance of having “uncomfortable conversations if we’re going to continue striving towards equality in the workplace.” She also stresses the importance of women helping other women and says: “Going back to the idea that men need to do more than just be good themselves, I think women should also hold themselves to that standard.” The mantra “If she can’t see it, she can’t be it” resonates with her.

However, Rebecca admits that she sometimes worries that people may think she only has her job because she is a woman.  She doesn’t see herself as a role model. “I think I suffer from a little bit of imposter syndrome. I had this discussion with someone in the office recently. I asked, ‘When did I become an expert? ‘When did people start listening?’”

Commenting on her recent nomination in the Rising Star at the Tech Excellence Awards – she since won the category prize – she says, “It was a nice bump. Sometimes you’re so busy looking forward, and you can forget to look behind you.”

As head of Expleo’s global centre of excellence based in Dublin, she is grateful for the chance to travel and see different perspectives and challenges that women face in other countries. Visibility is key.  “I speak at any event to which I’m invited.  A couple of years ago, when I was in the audience looking up that female representation wasn’t always there, or women speakers were only in the talks about female representation.  And that didn’t sit well with me.”

She’s also driven to achieve more gender balance within her team, and that goal starts with recruitment. “The more women we get through the door, the better.  I wouldn’t favour a female candidate over a male for a job, because that goes against what I said about getting a job because I’m a woman.”  But, she says she might look to see if there is a woman in the organisation wanting to make a move when filling vacancies in her team.

She has realised that she can’t win over everyone; instead she is focusing on her team’s vision. “I had to learn that any noise coming from outside of the team was just that – noise.  Opinions coming from my direct lines matter more to me than from someone I’ve never had a face to face conversation with.”

A Berry Interesting Life at...

As a teenager, Valerie Kingston liked...