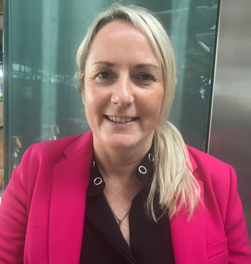 Deirdre O’Donovan has been appointed as the new Head of Security Operations and Police at Cork Airport.

Ms O’Donovan has worked at Cork Airport for over 25 years with her most recent role as Operations and Safety Manager. Her new role will involve responsibility for the full spectrum of the aviation security operations at Cork Airport and will report directly to the Managing Director at Cork Airport, Niall MacCarthy.

The new appointment comes as Cork Airport, Ireland’s fastest growing and most punctual Airport, recently announced plans to invest up to €10m in security capital expenditure (Hold Baggage Screening Project) in the next eighteen months.

Speaking on her new role, Ms O’Donovan said: “I am delighted to lead the Security Operations and Police at Cork Airport and I am passionate about airport excellence. The Airport is in its fourth consecutive year of growth, with passenger numbers forecasted to reach 2.6 million this year. The safety and security of our passengers, along with staff and airline partners, is of utmost importance for me personally and all the team at Cork Airport and I will be working with my team to maintain and enhance the secure facility and services that already exist.”

Managing Director at Cork Airport, Niall MacCarthy commented: “Deirdre brings a wealth of knowledge and experience to her new role. I have great confidence in her personally as well as her abilities and professionalism. I look forward to supporting her in the new security role.”

In a strengthening of its presence in...

Irish owned IT solutions and managed...