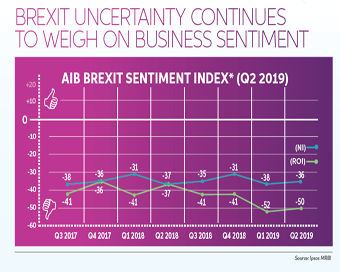 The AIB Brexit Sentiment Index for Q2 2019 reveals that the percentage of SMEs in the Republic of Ireland (ROI) being negatively impacted due to economic and political uncertainty surrounding Brexit has doubled from 21% to 42% in the past year.

By comparison, 48% of SMEs in Northern Ireland (NI) admitted their businesses were now being negatively impacted by Brexit. Meanwhile, the delays implementing Brexit are also continuing to weigh heavily on overall sentiment, with 37% of SMEs in the ROI and 40% in NI claiming the delay is having a negative impact on their business.

The research shows that the marginal sentiment improvement disguises several fundamental underlying concerns that many SMEs have about Brexit, and how it is already impacting on their businesses in terms of their cost of sales, working capital requirements as well as their investment and recruitment plans.  In terms of future projections from SMEs, 75% of ROI businesses say Brexit will have a negative impact on future business.

The research also shows that 40% of the ROI SMEs that had planned to expand or invest in their businesses have since cancelled or postponed these plans while another 16% are reviewing them. Similarly, in NI, 38% of SMEs have either postponed or cancelled investment plans while 10% are currently reviewing them. Bank borrowing, working capital requirements and job creation have all been negatively affected as a result.

AIB Head of Sector Strategies & Specialists, Mags Brennan, said: “Although sentiment among ROI businesses has marginally improved, it still remains in deeply negative territory with one in two SMEs feeling negatively impacted. Against a backdrop of continued uncertainty, businesses are especially concerned about the impact of Brexit on their business in the future and the impact on the wider economy. The Manufacturing sector, which is fundamental to the Irish economy, registered its lowest sentiment since the first wave of research was carried out in 2017 and, along with the Tourism sector, was the most negative sector among ROI SMEs. At AIB, we encourage businesses to consider the impact that these additional costs could have on their working capital requirements and to discuss with their bank prior to the October 31st deadline to ensure that they are prepared for any eventuality.”

AIB Chief Economist, Oliver Mangan said: “While we have seen a marginal increase in sentiment among SMEs in both the Republic of Ireland and Northern Ireland, overall the latest survey shows that the economic and political uncertainty surrounding Brexit is having a significant impact on many SMEs and their sales, investment plans and business activities. The continuing uncertainty and prolonged delays to Brexit are also problematic for SMEs concerned about how Brexit will impact their business in the future. One of the more notable features of the Q2 2019 research, however, is the number of firms that say Brexit is having a negative impact on their business now at 42% of SMEs in the ROI and 48% in NI. This is much higher than earlier waves. Meanwhile, the delay to Brexit and the continuing uncertainty this brings is affecting firms, with circa 40% of SMEs in both jurisdictions saying it is having a negative impact on their businesses.”

AIB’s Brexit Sentiment Index conducted by Ipsos MRBI is a quarterly survey of more than 700 SMEs in the Republic of Ireland and Northern Ireland that assesses the attitudes of SME business leaders on Brexit and the impact on their businesses. Given the continued Brexit uncertainty, AIB, in partnership with BDO will be running a series of Brexit workshops for SMEs focusing on customs and finance throughout September and October.

Diversity in the Boardroom