A Need for Change! Caring and Unpaid Work in Ireland 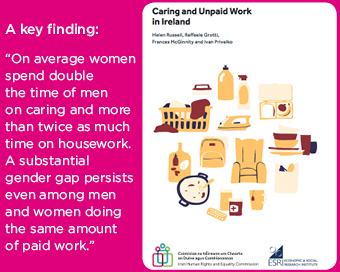 45% of women and 29% of men provide care for others on a daily basis according to new research entitled “Caring and Unpaid Work in Ireland” published today by the Irish Human Rights and Equality Commission (‘the Commission’) and the Economic and Social Research Institute (ESRI).

Adults in Ireland spend an average of 16 hours per week on caring and 14.5 hours on housework. The time spent on care and housework combined is the third highest in the EU, according to the study. The report examines Irish data collected over more than a decade to investigate involvement in unpaid work in the areas of childcare, care of older adults or those with a disability, and housework. It also looks at how people’s involvement has changed over time, and how Ireland compares to other EU Member States.

The report is being launched today {July 9th, 2019} by the Commission and the ESRI with the participation of TV Presenter Brendan Courtney who has spoken of his personal experiences of care related to his parents, and by Bernie Bradley who alongside being a full-time Social Inclusion Officer with Monaghan County Council  is a Member of the Commission’s Disability Advisory Committee and parent of a daughter with Down Syndrome.

Some of the key findings include:

•The majority (55%) of those providing unpaid care on a daily basis in Ireland are in employment.

•Ireland has the third highest weekly hours of unpaid work for both men and women across the EU28. This reflects the relatively low State involvement in support for caring and sees Ireland more in line with Southern and Eastern European Countries, rather than with Scandinavian and  Western EU States.

•There is significant and persistent imbalance in Ireland between men and women when it comes to unpaid work and caring.

•On average women spend double the time of men on caring and more than twice as much time on housework. A substantial gender gap persists even among men and women doing the same amount of paid work

•Between 2007 and 2011 the time spent by men on care and housework rose, but this returned to 2007 levels in 2016, suggesting this was a response to the economic shock of the recession rather than an underlying shift in behaviour.

The report findings suggest a number of policy implications including:

•A need for changes in social and employment policies that support carers, facilitate the combination of care and employment and encourage greater male participation in care.

Separate to this research, in June 2018, the Irish Human Rights and Equality Commission submitted its recommendations to government on Article 41.2 of the Constitution. This was followed by a meeting with the Minister for Justice and Minister for Employment Affairs and Social Protection where the prospect of establishing a Citizens Assembly on the area was raised by the Commission.

In later 2018, the Commission appeared before the Oireachtas Committee on Justice and Equality to recommend that Article 41.2 of Ireland’s constitution be amended rather than deleted to recognise the value of care work in Ireland, and the public good provided by care work within and by families. The Government has yet to bring forward legislation for a referendum  on Article 41.2 of the Constitution.

“As life expectancy increases and medical therapeutics advance, Ireland is experiencing a transformation. With relatively low State involvement in support for caring, adults and children are reliant on being cared for and supported by family.

“The State must remain focused on the reform of Article 41.2 not only as an exercise in removing an archaic reference, but also as a means of introducing a long overdue recognition of the public good realised within Ireland’s families and in caring roles.”

Lead author of the report, Helen Russell of the ESRI stated:

“Caring and other household work is vital for the well-being of individuals and society, but because this work is unpaid it is largely invisible and rarely measured. Quantifying the extent of care and unpaid work, as we have done in this study, is a first step in valuing these activities.”

Diversity in the Boardroom