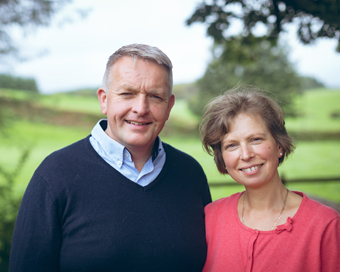 As a teenager, Valerie Kingston liked nothing more than to make some yogurt and take it with her on berry-picking expeditions on her family farm in Macroom, Co Cork: “I’d put the berries into the yoghurt – it was lovely; there was nothing like it,” she recalls.

This was many, many years before the advent of the thriving food company Glenilen Farm was founded by Valerie and her husband Alan on the Kingston family farm in West Cork. However, even at that early age – she was only about 14, she recalls – she enjoyed nothing more satisfying than making food from scratch.

That deep interest in making good food stayed with her. After graduating from UCC with a degree in food science in 1991, she worked with Dairygold for several years. She then spent two years volunteering on a dairy project in West Africa before marrying Alan, whom she had known through a church youth group since they were both teenagers, and settling down on the 60-acre dairy farm in Drimoleague  in 1997. “We took over the family farm, and there was no pressure for me to go out and work,” she recalls. “I loved cooking and growing food and I started taking the milk and making yogurts and soft cheese.”

Valerie began to sell her yogurts and her baking at the country markets. Initially, she recalls, Alan was merely amused: “He thought he’d married a hippy,” she quips now. However, his ears pricked up when she came home one Saturday with £100 from the market. That was a significant earning back in the recession-crippled nineties. “After that he joined me in the kitchen! He learned how to put on an apron and use the Kenwood Chef. We spent a hectic five years in the kitchen making products and selling, although Alan was still running the farm – that was his destiny as far as he was concerned,” she recalls.

However, as time went on, things changed. Alan started feeling pressure to expand and to increase his milk quota, but the return on what Valerie was getting from sales of her milk-based food products encouraged him to think again: “We saw the potential that was there, so instead of buying more land or increasing our quota, we approached the West Cork Enterprise Board and requested funding to help build our first dedicated  manufacturing premises.”

With this and a bank loan they built a manufacturing premises and moved into it in 2002. By 2008, demand for Glenilen Farm products had grown so much that the couple expanded their manufacturing facility – it is now a 1200-square foot factory. It turned out to be a great decision: “If we’d stayed in the traditional farming sector I would have had to go out to work and that is one of the reasons this all came about. I wanted to be a stay-at-home mother. “I feel really blessed and privileged to have been able to do that and to bring up our children on the farm,” recalls the mother-of-three.

By around 2009, the business had expanded so much, she recalls, that they took on a management team: “When you are able to take on people who can do the job better than you it’s a great place to be! Alan was a dedicated dairy farmer but he is very passionate about the business and eventually leased the farm to a neighbour. “We buy in the milk now,” says Valerie, who took a step back from the day-to-day running of the business in 2008: “However, I am still very involved in the overall operation. We are very thankful – we had no inkling as to the scale our business would reach. We get such a kick out of being able to provide local employment in a rural location like Drimoleague! “Instead of it being an unviable farm, as it would be if we were farming it traditionally, now we’re able to employ around 40 people and nurture and cultivate life in rural Ireland. This is an important part of the Glenilen Farm ethos.”

And yes, Brexit is as big an issue for this thriving dairy company as it is for many other Irish firms – Glenilen, which experienced a growth in turnover from €3.2 million in 2013, to an estimated €5.7 million in 2019, currently employs 45 people. Like many other Irish businesses, the Drimoleague-based dairy has a significant stake in the British market – a full 25% of its revenue comes from export to the UK. However, says Alan, Glenilen Farm remains positive and focused: “There is a lot of uncertainty ahead with Brexit, especially for the dairy industry, which is very reliant on trade with Britain. “Whatever happens, the UK will always be our neighbour,” he says, pointing out that the UK taste palate is very similar to that of the Irish taste palate.

Inevitably, he admits, Brexit promises a rocky road, but Glenilen Farm can take comfort from the fact that this is a company which has a large and loyal consumer base on its doorstep, so as Alan explains, “our focus for the short-term will continue to be the Republic of Ireland and the UK – and in the medium term we will be looking to develop markets in mainland Europe.”

Leading the way for Women in...

Rebecca Keenan’s meteoric rise from a...

Ask Lisa Callanan about the secret to her...