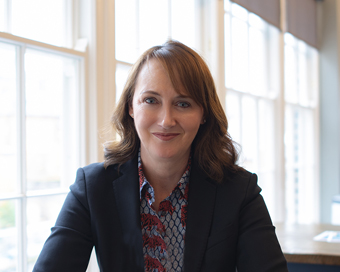 Multi-award-winning businesswoman and entrepreneur Triona Mullane would be the first to admit that she has a hell of a lot to thank her mother for.

It’s been a satisfying six months or so for the Co Limerick native, who is a finalist in the Emerging category of the 2019 EY Entrepreneur of the Year Awards.

Just imagine what she would have missed out on if she’d followed her original urge to become a Mechanical Engineer! Back in the 80s, Triona’s mother worked in the admissions department of UL. After failing to encourage Triona into teaching – Triona chose engineering as a career, and was subsequently offered a place in the UL Mechanical Engineering programme – she informed her ambitious daughter that, in fact,  “computers were the up-and-coming thing.”

Triona listened – and that was that.  “I never looked back,” she laughs now, many years into a hugely successful career in the mobile data and telecommunications industries. While completing her BSc in Computer Systems, Triona had yearned for a career involving “something high-tech, something cutting edge, something different,” she recalls: “I was just dying to get out of Limerick and travel,” she laughs.

On graduating, her first job, with a “very exciting data comms company in Santa Monica, California,” fulfilled both of those dreams and then some. After three unforgettable months in Santa Monica as a junior software engineer, Triona returned to the company’s HQ in Dublin but never lost touch with California: “I was regularly over and back to LA in the late eighties and early nineties,” she recalls. In the meantime she was busily moving up the ranks and over the next seven years, she landed the positions of team leader and manager before eventually moving into senior management at the Dublin base.

“It was very cutting-edge technology,” she recalls. “We were building out the internet from a telecom perspective. It was really interesting stuff and I loved it. “You weren’t doing anything boring! It was all around software development and support, so we had huge customers.”

Some advice here for other ambitious women in the industry: “Take the opportunities as they come but you also need to make them,” she warns. “You need to do the job before you get the job.”

In 1995 she was headhunted by a company called Aldiscon: “It started SMS and text messaging – we were the first to build out a text messaging system in Ireland. I went into a Head of Engineering role and ended up running a team of about 100 people.” It was a thoroughly fantastic time, she recalls: “We were acquired by Logica in 1997 and I was on the senior management team and stayed with them.”

Triona and her family later moved to the US where she became CTO for Logica across North and South America – during this time she devised and executed a product strategy that resulted in 77% market capture for Logica’s SMS, OTA and Prepaid suite of products. “It was a really big market and they were great years – tech bubble time,” she recalls with some nostalgia. Back in Ireland in 2007, she was approached to become CTO of another leading-edge tech company which was later bought out by Blackberry in 2011.

It was around this time that Triona started to experience itchy feet: “I’d always thought that one of these days I’d start my own business. I’d seen a lot and been through everything so it was just a case of whether I was brave enough to found my own company.” She decided she might be, and two years later formed mAdme Technologies. mAdme, she explains is actually a kind of acronym which stands for Mobile Advertising and Mobile Engagement but, quips Mullane: “Sometimes I wonder was it just about the fact that I was mad for ever starting it!”

She clearly wasn’t – the company is thriving. mAdme now has offices in Dublin, India and New York and sells its mobile engagement tech platform to mobile operators all over the world: “We provide a new customer experience platform used by major mobile operators in places such as India, Sri Lanka, the Middle East, North America, Malaysia, and Latin America among others. We have a lot of big and loyal customers so things are going well so far,” she says.

What’s the secret to her success with mAdme? “You start something optimistically. Then there are inevitably knockbacks but a huge part of success is perseverance, endurance and optimism,” she recalls. “Being a founder or CEO you can’t walk away you make the commitment and you’re all in. “For me it was also about challenging myself. “However if you don’t start with an optimistic perspective, and, possibly, a little naivety, you’d never start at all, especially when you look at the number of businesses which fail.

“The failure rates are huge but you have to start with a great sense of optimism because you have to believe that you’re in the percentage that won’t fail. “Then once you’re in there, you persevere and get yourself up and dust yourself off after the knockback and keep going.” Another crucial element to mAdme’s success, she says, is the staff: “I have a fantastic team – you need to surround yourself with people like these.”

There’s another important element too, she says, adding that: “You also need to create a nice environment; an ‘all in it together’ kind of attitude!”

Leading the way for Women in...

Rebecca Keenan’s meteoric rise from a...