The Skies the Limit! 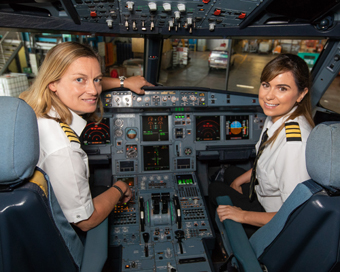 Aer Lingus announced the findings of research conducted by Red C relating to pilot recruitment and the issue of encouraging more women to apply for the career.  The company has had intakes for its Future Pilot Training Programme for the last two years and is currently taking applications for a new intake with a closing date 8 July, 2019.

Whilst the programme is very popular, the application rate among females in the past has only been around 7%. Approximately 10% of Aer Lingus pilots are women, which is on a par with or slightly ahead of airlines around Europe, but the company is keen to encourage more women into the career.  The purpose of the research was to investigate why applications among females is so low and develop a strategy to boost female pilot recruitment.

The survey also showed that there is a low level of awareness that the Aer Lingus Future Pilot Training Programme is fully funded by the company, with only 19% of respondents aware of this fact (21% (m) and 16% (f)).

Davina Pratt is Director, Operations at Aer Lingus. She is a former Chief Pilot with the company and is the only woman ever to have been appointed to that role globally. Speaking about the research, Davina said “Aer Lingus has always been keen to encourage more women to become pilots, but our survey shows that there is still considerable work to be done to promote the career to women and to address some of the myths that exist. For example, regarding work life balance, maths and STEM qualifications, and the funding of pilot training at Aer Lingus. But primarily, when it comes to encouraging more women to come forward, this survey tells us that we need to get out into the schools and colleges to promote flying as a career for women as it simply isn’t top of mind and isn’t being actively promoted to them as a career option currently.”

Twice as many males as females initially considered a career as a pilot (6%(m) vs. 3%(f)) with a fraction of these advised to go into the role, and less than 1% actually making a career of it.

While School Guidance Counsellors are used most often as a source of information on careers, word of mouth from family, friends and contacts are considered the more influential sources of information for young adults when deciding on a career path.

While ‘not for me’ is the most cited reason for not considering a career as a pilot, for females, the other top mentions include not believing they had the necessary skills (40%), not being brought to their attention as a possibility in school / college (35%) and working unsociable hours (33%).  For males, perceived financial investment is the main barrier (35%) with just 26% believing they don’t have the skill set.

Females are significantly less likely than males to believe a career as a pilot would suit them and this gap is particularly evident among males aged 25-30; 51% believe they would suit the role of pilot vs. 27% of females in this same age group.

The most important factors in any future career for young adults is doing something they enjoy (97%) and something they are good at (97%), but just over half of respondents believe a career as a pilot could deliver on these factors.

Just 1 in 3 young adults believe being a pilot would allow for a good work life balance, a career consideration which is extremely important to them (95%).

A gender divide is evident in terms of the attitude towards pilots / the role of pilots with females more likely to agree that there are too few female pilots (79% female vs. 45% male) and that the role is not female friendly (33% female vs. 19% male).  That being said, a significantly higher proportion of males (71%) feel the career is inaccessible to the average person (61% females).

Once the programme is detailed, 35% of females are interested in the Aer Lingus Pilot training programme, with males marginally ahead at 43%.

All of the propositions from Aer Lingus to encourage more female pilots were well received by the female respondents, most notably an open day at Aer Lingus with female pilots and promoting the career to females in secondary schools.

A Cause for Celebration

The HR Suite has launched a new book to...