Soapbox Science to Return to the Streets of Dublin 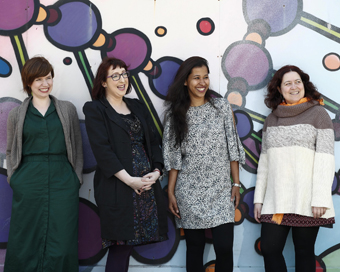 Soapbox Science is set to return to the streets of Dublin at the end of this month when 12 female scientists will step onto their soapboxes to talk about their research in areas of science, technology, engineering, mathematics and medicine.

Soapbox Science is a global public outreach platform for promoting women scientists and the science they do. Its aim is to bring scientists to the streets to interact with the public and increase the visibility of women working in science. It follows the format of Speaker’s Corner in Hyde Park, London which is historically an arena for public debate.

Speaking in advance of the event, Dr Dara Stanley, UCD School of Agriculture and Food Science, said, “Many people have not met a scientist before so Soapbox Science brings scientists to the city streets to interact with people going about their daily lives. As women in particular are under-represented at many career stages in STEMM subjects, Soapbox Science aims to break down stereotypes around who scientists are by featuring a number of female scientists speaking on a number of diverse topics.”

She added, “Soapbox Science Dublin is free to attend and is great fun so please do come along and hear about some amazing science being carried out by twelve fantastic female scientists.”

One of the Soapbox Science Dublin speakers is Dr Nicole Beisiegel, UCD School of Mathematics and Statistics, who will deliver a talk entitled, ‘How big storms move big boulders and big computers save our coasts’.

Dr Nicole Beisiegel said, “Ireland’s coasts are often battered by big storms that can cause massive floods and damage. During my Soapbox Science Dublin talk I will be speaking about how I use maths to study extreme storm waves, their formation, impact and even their ability to move coastal boulders that weigh up to 600 tonnes.”

Another of the Soapbox Science Dublin speakers is Fiona Dermody, School of Computer Science, DCU, who will deliver a talk entitled, ‘Can computers help you with your public speaking?.’

Fiona Dermody said, “People who have a fear of public speaking tend to avoid it and this can have a significant impact on their success in education and industry. During my Soapbox Science Dublin talk I will be speaking about the computer system, which I have developed to enable people to practise their public speaking in private and receive visual feedback, in real-time, on their speaking performance.”

In addition to the Dublin event, two other Soapbox Science events are taking place in Ireland this year, Galway (29 June) and Cork (6 July).  You can follow Soapbox Science Dublin via @SoapboxSciIRL and #SoapboxScienceDublin.

Getting the Balance Right!

A Unique Opportunity for...