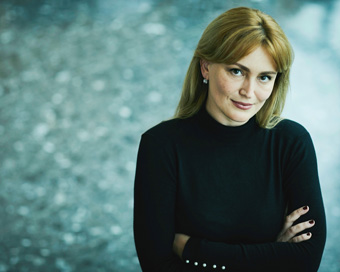 This month we feature Mariana Kobal as part of our Women Migrants in Business Series. Mariana comes from Ukraine and relocated to Ireland in 2014. The same year she set up her company, Wazp.

Mariana Kobal was working as an R&D manager for a furniture manufacturer in Poland when she met Irishman Shane Hassett.

The two colleagues shared an enthusiasm for 3D printing and its potential to transform the consumer goods industry. “We saw the possibilities. While it won’t replace traditional manufacturing, it will be an amazing addition,” she says.

Mariana moved to Ireland in 2014 to follow their dream of setting up a 3D printing company. She describes Wazp as a supply chain company for delivering 3D printed products at high volume to brands worldwide.

The team of 17, based in Tralee in County Kerry, work with consumer manufacturers, including homewares retail giant Ikea to deliver 3D printed products.

Having graduated in English language and literature from Uzhgorod National University in Ukraine, Mariana subsequently studied sustainable design through Open University. She worked in product development for furniture manufacturers in the Ukraine and Poland, and also ran her own interior design business. One of her clients was Irish company Dominex and she assisted on projects including the Dublin City Library.

Wazp’s target market is in consumer goods, in particular, homeware and electronics. Eyewear is an emerging market, and Mariana says 3D printing gives many possibilities with shapes and invisible hinges as it allows glasses to be printed as one piece.

Mariana believes that Ireland is an island of opportunity. She credits assistance from Enterprise Ireland and from their Local Enterprise Office in Kerry as “a kick start” to help them to build their business plan. Early on the company looked to raising capital to scale up, develop the software and build the team. An initial round with angel investors through their own networks in Ukraine and Ireland raised €300,000. A second seed round of €700,000 included funding through Enterprise Ireland’s High Potential StartUp scheme.

Wazp’s biggest win so far and validation of the business was the recent round of investment in late 2018 where the company raised €2million through a group of Irish-based entrepreneurs, Mariana says.

On the other side, one of the biggest barriers had been raising capital. “We had tough situations. Looking back, we should have looked for the additional funding much earlier. Cash runs out faster than you think.”

Getting used to the Kerry accent was challenging, she says with a laugh. It took her a while to get used to the Irish communication style. “Everybody’s so polite here, and the way of saying things is different. When I said something, it was perceived as a little rude when I did not mean it.”

She says compared with the bureaucracy she’s encountered in the Ukraine and Poland, the process for setting up a business in Ireland is clearer, more transparent and faster. To free up resources, they outsourced financial and regulatory functions, including taxation and payroll to Dublin-based accountancy firm, Anne Brady McQuillans.

A business highlight was when the Wazp team meet with representatives from Ikea and technology multinational HP. “I was very proud when we as a little company here in Tralee were sitting with these companies, one with a $36billion turnover, the other with a $50 billion turnover, and we were giving our suggestions about what can be done in a better way with 3D printing and they were listening to us.”

In Wazp’s first year, they had a setback, which Mariana says was a learning opportunity. They had spent a lot of money building software before all of the other aspects of the business were in place. Fortunately, they realised quickly that approach wasn’t working. She is pragmatic about the setback which she sees as an investment into their experience. “Our philosophy is that it’s no problem to have setbacks or to fail if we fail fast and learn from it.”

So what does it take to be a successful entrepreneur? Mariana advises to “be direct and say when there is an issue.” She sees this quality as a time saver in the long term, which will help to build your reputation.

Another quality is reliability. She says once you promise something, you must deliver. “You can put a long time into developing a relationship but ruin it very quickly by failing to deliver”.

Networking is vital. “Be out there, get the exposure to companies to see how to talk and to develop contacts. This will allow you to see your company in a new light.”

Describing her best traits, Mariana says that she’s “down to the point. I’m fact-based. When I’m meeting someone, I prepare with all of the details and figures and facts. I think that helps a lot with negotiations and discussions.”

“It was quite a journey to get where we are now”, Mariana says. She’s appreciative of the incredible support from the government and private organisations and looking forward to creating a 3D printing hub for the future.

This month we feature Eva Milka as part of...