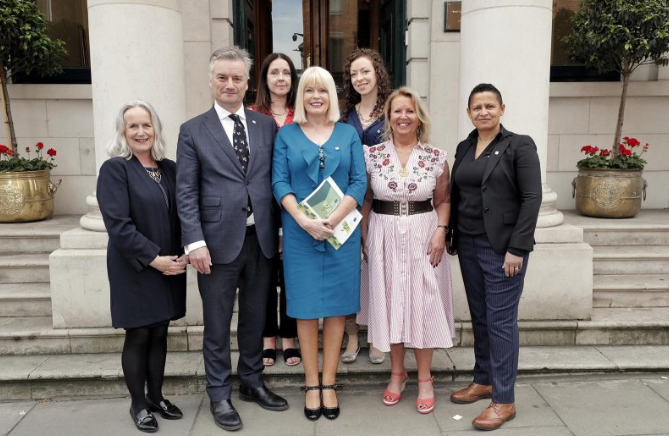 A charter to promote gender equality in the university sector was formally launched by Minister of State for Higher Education Mary Mitchell O’Connor at an event hosted by Trinity College Dublin recently.

Designed to promote stronger action on gender equality and research, the SAGE Charter of Principles for Gender Equality supports structural, cultural and political change to eradicate sexism, bias and other forms of discrimination in research and higher education. Higher education institutions across Europe will be invited to sign up to the charter.

At the recent launch Trinity’s Provost Dr Patrick Prendergast formally endorsed the Charter on behalf of the Irish Universities Association. By supporting the Charter principles Irish higher education institutions signal their commitment to addressing persistent gender imbalances and to responding to the European Research Area call for action on gender equality in research. This marks the first Irish signing of the SAGE Charter, which is being rolled out across European higher education institutions.

The 12 principles of the charter include a commitment to improve gender balance at all levels of academic careers; to eliminate the gender pay gap; to mainstream gender equality awareness and best practice in the daily operations of the institutions; to promote family-friendly policies and work-life balance and to eradicate bullying, sexual and moral harassment.

Minister Mary Mitchell O’Connor said: “I am delighted to launch the SAGE Charter of Principles for Gender Equality, which is devising and implementing interventions to advance gender equality in higher education. The Charter needs to be adopted by all research and higher education institutions. We cannot afford to lose the talent that we have invested in women. Building greater diversity contributes to greater creativity and innovation.  Role models are vital, and the global experience shows the value to our students in seeing the range of opportunities and experiences available to them.”

Led by Trinity Centre for Gender Equality and Leadership, the SAGE (Systemic Action for Gender Equality) project has developed a proven model that can be implemented throughout the European research sector and beyond. Funded under the EU Horizon 2020 programme, its goals are to remove barriers to the recruitment, retention and career progression of female researchers; address gender imbalances in decision-making processes and strengthen the gender dimension in research programmes.

Welcoming the charter Provost Dr Patrick Prendergast commented: “Our world needs the full contribution of all genders if it is to meet all the great challenges that lie ahead. Recognising the vital role women can and do play in university life, we fully endorse the principles of this charter. It is another step along the important road towards full gender equality both here in Ireland and across Europe.”

The launch was accompanied by a panel discussion on how gender equality can be implemented and accelerated within the Irish Higher Education sector, featuring contributions by Head of Policy and Strategic Planning at the Higher Education Authority Dr Gemma Irvine; Director General of the Irish Universities Association Jim Miley; Dr Annie Doona, Institute of Art Design and Technology Dun Laoghaire; and incoming President of the Graduate Students’ Union at Trinity Shaz Oye.

Director of Trinity Centre for Gender Equality and Leadership Professor Eileen Drew added: “Ireland is at the forefront in tackling gender equality in higher education, and it has been very exciting for the Trinity Centre for Gender Equality and Leadership, as coordinators of the SAGE European project, to work with our partners to spread this knowledge and experience across Europe. In 2013 Trinity played an instrumental role in forming the Athena SWAN national committee and a network of higher education institutions and stakeholders, beginning a process that has seen work toward gender equality in the Irish higher education sector growing every day.”

The Institute of Directors (IoD) is a...