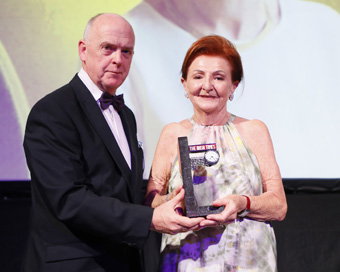 Ms O’Donoghue, who grew up on a farm in Boston in The Burren in North Clare, received The Irish Times Top 1,000 Distinguished Leader in Business Award at a gala event in Dublin’s Mansion House.

Ms O’Donoghue, joined the Irish-founded company in 1979, a decade after it opened its first outlet in Mary Street in Dublin. During 37 years with the company she oversaw the establishment of its HR operation and its expansion into several international markets, including the United States. It now has 370 stores in 11 countries and employs over 70,000 people.

In her speech Ms O’Donoghue outlined an idyllic but challenging childhood on the family farm and at boarding school in Gort, County Galway. She then went onto describe her early years in the hotel industry and her long career with Penneys. During the evening she received not one but two standing ovations from the assembled guests.

Liam Kavanagh, managing director of The Irish Times (pictured presenting the Award), paid tribute to all the nominees who he said would act as role models for aspiring business leaders.

Network Ireland Steps Up with...

Network Ireland and AIB have agreed to...