Getting to the Heart of the Matter! 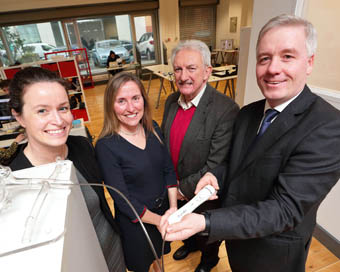 It’s one hell of a journey from having a brainwave about a life-saving medical device to actually saving lives – but the first crucial milestones are already behind engineer Dr Lucy O’Keeffe. Lucy is CEO of CroíValve, a company which recently landed €3.2 million in investment funding for the development of a device, which is expected to save the lives of thousands of elderly people around the world.

A spinout from the Trinity Centre for Bioengineering, CroíValve has developed a minimally invasive treatment for a serious heart condition called tricuspid regurgitation (TR). This condition occurs when the leaflets of the tricuspid valve – the valve separating the heart’s right ventricle and right atrium – fail to close properly due to dilation of the right side of the heart, allowing blood to leak backwards into the right atrium.

It’s an extremely severe cardiac disease which affects more than 550,000 people every year in the EU and US.  Yet, very few of these usually elderly patients receive surgical treatment, as they are deemed too frail. Such patients, usually in their late 60s or in their 70s, generally have multiple heart issues including problems with the tricuspid valve: “Less than one per cent have surgery, which means the problem is not solved and they endure a very poor quality of life with repeated hospitalisation,”  explains O’Keeffe.

That’s because TR causes further expansion, and eventually failure, of the right side of the heart which leads to progressive symptoms including fatigue and fluid retention. These in turn lead to abdominal and ankle swelling, liver and kidney failure, and even death. “Three in every five patients die within three years of developing problems with the tricuspid valve,” says O’Keeffe who explains that, because the vast majority of TR patients are elderly and too frail for open-heart surgery, the only option available to them is medication that removes the excess fluid but does not cure the condition.

But Croívalve is about to change all of that.

The device, explains Limerick-born O’Keeffe – who graduated from college with a degree in mechanical engineering before moving into the area of biomedical engineering as a PhD student – restores the function of the tricuspid valve. “CroíValve’s innovative technology specifically addresses the challenges associated with tricuspid heart valve disease. “The device is delivered through the heart’s blood vessels and seals the gap between the native valve leaflets, therefore restoring the heart’s function and preventing regurgitation. “The device is held in place with a unique anchoring system that removes the need for potentially traumatic anchoring into the right heart. The procedure is safe, simple and effective.”

And with over half-a-million new cases annually in the US and EU alone, CroíValve is expected to meet a significant unmet need and market opportunity. O’Keeffe has much experience in the area of medical devices – her first job was with a medical devices multinational in Galway. The company had a large R&D department where she worked for several years, moving up the ladder to lead ever-bigger, more complex projects, one of which, she recalls, was the development of a device to replace the heart’s natural aortic valve:
“It was a fascinating project and it got me interested in the field of non-surgical treatment for heart valves,” she recalls.

She later worked in a number of other firms on different devices, one of which was in the area of novel drug delivery; another involved the development of technologies to help clinical trials which are the route to market for medical devices and pharmaceuticals.

Meanwhile, the man who was to later become CroíValve’s Chief Medical Officer, cardiologist Martin Quinn, was coming up with designs for devices which could be used to help with a variety of heart problems.  After Quinn patented his concepts in 2014, a lecturer at Trinity College helped secure funding from Enterprise Ireland for the development of one of these  devices – for the tricuspid valve.

Now that they had funding, it was time to form an expert team to develop the concept. One of the people they reached out to was Lucy, who was fascinated by the concept, and who had for some time, become increasingly interested in the burgeoning start-up sector.

Development quickly got underway, and the work continued steadily through 2016, 2017 and 2018: “Once we saw that there was a viable business in the concept we set up CroiValve Ltd in 2017,” O’Keeffe recalls. They spun out of Trinity at the end of 2018 and have continued with extensive development and testing of the product. “The next step is to further develop the device and bring it to the clinical trials stage,” she explains. All going well the company hopes to have the device on the market with the next few years. “This is a new medical therapy in a data-driven field so we will need to build clinical evidence to demonstrate the value of the device. We’re very excited about bringing this innovative technology to the patient.”

Having led change and driven transformation...