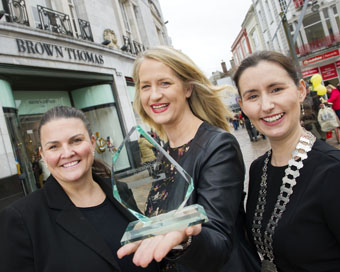 Cork businesswomen reluctant to put themselves forward for business accolades

The deadline for award entries is Friday 5th April 2019.

Speaking ahead of the upcoming awards, Network Cork President, Gillian Hennessy said: ‘Although we see numbers of entries increase every year, there is still huge scope across the categories for more businesswomen to enter or nominate a colleague. A stigma still exists around ambitious women who acknowledge their successes and we’re seeing a reluctance among women in Cork to put themselves forward for an award. Whether you’re a solopreneur or managing a team of 200 we strongly urge you complete the submission.

‘These Awards strive to recognise the achievements of female-led businesses in Cork so that they can shine as examples for others. Not only do they encourage growth and expansion for female-led companies and startups but they also play a part in consolidating the role of women as changemakers in the Irish business landscape. In keeping with the national theme of the organisation this year, we are asking women to ‘Step-Up’ for the awards.”

There are 8 categories open for entry. Winners at a regional level will be put forward for consideration at the national awards.

The International Federation of Business and...