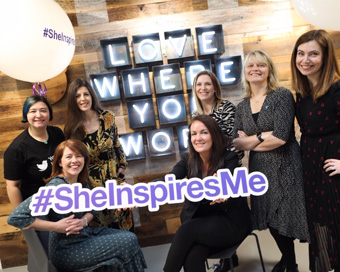 When I called for a chat, Anne Kiely had just finished hosting a discussion panel of four top Twitter female executives, all of whom, she explained were driving innovation across the globe.

The discussion was part of the company’s #SheInspiresMe Women in Leadership Breakfast, which took place in the run-up to International Women’s Day (Friday March 8th).

#SheInspiresMe aimed to shine a light on women who make a real impact on people’s lives and provide some valuable career advice from female high achievers across a variety of corporate management roles.

The debate, she recalls, threw up some useful tips for female employees. One issue, which was the focus of intense discussion, was that women should never be afraid to ‘pivot’ – that is, move into a very different role or opt for a complete change in career, even after a number of years. Pivoting is something with which Kiely herself, who spent many years in banking before moving to Twitter, is deeply familiar. Follow your gut instinct when you feel there is something out there that you should do, she advises: “If there’s something you’re passionate about, which will require you to change your role or company, do it,” she advises:
“I think that sometimes women don’t do this as readily as men; it’s a confidence thing, although that’s changing.”

After graduating from UCD in the early nineties with a BComm degree – Kiely specialised in finance and industrial relations – She spent years in the Irish banking sector, first with TSB where she spent a significant period in the money markets, and later with Ulster Bank and AIB Capital Markets. Along the way she took a year out to travel the world, and studied for a HDip in Psychology before earning an MSc in 2002. She also worked with Google in the HR sector before returning to Permanent TSB in 2014 as HR Business Partner, a period, she recalls which was a very difficult time for the banks: “At this point it was about six years into the recession and the banks were very much under the ownership of the State. “It was a difficult time to work in HR in banking,” she recalls, adding wryly that she’d worked in the banking sector during the Celtic Tiger boom years “and now it was the hard times.”

The lesson she took away from that time, is that experience really does count:

“The thing I took out of that was the fact that the people who dug the banks out of it had been in banking for two or three decades.“A lot of the people who brought banking through were highly experienced and highly resilient. They saw the pay freezes and their pensions depleted but they came into work every day to see the bank through the crisis.”

It was a particularly difficult time for the young people in the early stages of their banking careers, she recalls:

“It was tough,” she recalls, particularly, she believes, for the millennial generation borne of the Celtic Tiger era, who were not necessarily used to hard graft, she says: “It was a difficult time to start. They learned a lot,” she comments, recalling how some young banking personnel were in call centres dealing with people in mortgage arrears, and handling some extremely difficult calls. Three years later, Kiely underwent another pivot, this time to Twitter as HR Business Partner for the Dublin site, and last year she moved again, this time through a promotion to Head of HR Business partnering for EMEA.

“My role and my team’s role is to support business leaders across Twitter EMEA,” she explains. “We spend time with these business leaders to devise, business plans, structures and training for their teams in order to make their people be the best they can be every day.” Despite the cultural changes wrought in the workforce over the last few decades, Kiely believes that many women still underestimate their impact and how good they are. “This is changing but we still have work to do to instil that pride in women to do whatever it is they want to do.”

Women should also not be afraid of wanting to do it all, she counsels – as a mother-of-three who has always worked full-time, she says, there were times when she worried that she was spreading herself a bit too thinly:

“I have worked fulltime for 25 years. I have three children between the ages of 10 and 15 and I worked all the way through when they were young. “At times I worried that I was spreading myself a bit thin but thankfully I have come through and they’ve all turned out wonderful – and reasonably well balanced! “

Don’t be afraid to want to do it all, she advises – but at the same time, understand that you’re not infallible or superhuman: “It’s important to check in with yourself and make sure that you’re doing okay.

Back in the early seventies, when computers...

A Passion for Paint!

Paint is very much in my blood. My parents...