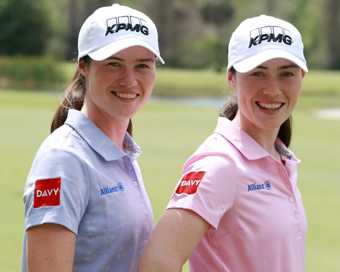 Ireland’s wealth management provider Davy, has announced its support of Irish golfers Leona and Lisa Maguire in a new sponsorship deal which will see the sisters become ambassadors for the Davy brand.

The announcement comes ahead of this weekend’s IOA Championship in Beaumont, California, where Leona Maguire will look to build on her impressive top-five finish at the Natural Charity Classic in Florida just under two weeks ago.

As both golfers continue their pursuit of world class outcomes on the international stage, Davy will play a key supporting role by providing the Maguire sisters with financial planning and consultation services that will help them continue to make important strides in their professional careers, while focusing on fulfilling their personal ambitions.

The new partnership will also see both Leona and Lisa wear the Davy logo on their competition clothing, joining fellow Irish golfer Paul Dunne in representing Davy on courses across the globe.

Brian McKiernan, CEO of Davy Group said: “Davy is extremely proud to support people in their pursuit of achieving world class outcomes, be it in business or in their personal lives. As an Irish company, we are delighted to extend that support to two of the brightest and most ambitious young female golfers Ireland has ever seen, in Leona and Lisa Maguire.”

“We are confident both Leona and Lisa will make their mark on the world stage and look forward to working with them both as they endeavour to achieve success in the professional game. I would like to take this opportunity to wish Leona and Lisa continued success in 2019 and beyond.”

Leona Maguire said: “I am so proud to become a Davy ambassador and represent them on my travels across the world as a professional golfer. It’s great to be supported by such a successful Irish company and I’m looking forward to working closely with the Davy team.”

Lisa Maguire said: “We really appreciate the support and encouragement Davy have shown both Leona and I and we are both very excited about the future. It’s great Davy are supporting young Irish talent and we cannot thank them enough for the belief they have shown in us.”

Leona Maguire has already enjoyed a fantastic start to her professional career, carding a pro-career best on the Symetra Tour under a fortnight ago, replicating the form which made her one of the most decorated amateur golfers in history.

She made her professional debut in June last year at the ShopRite LPGA Classic in Galloway, New Jersey (USA) where she finished in 15th place. She followed this appearance with a 3rd place finish at the Decatur-Forsyth Classic in Decatur, Illinois (USA) just one week later. Leona secured her place on 2019 Ladies European Tour in December, where she finished 5th in the Qualifying Finals Lalla Aicha Tour School at Marrakesh, Morocco, after impressively carding rounds of 68, 70, 70, 72, 67.

Lisa Maguire shares an equally stellar amateur record, having excelled in the Duke Women’s Golf’s ACC Championships in 2017 and 2018, at Duke University. She won 16 amateur titles before turning professional in June of 2018, debuting alongside her sister at the ShopRite LPGA Classic.

The Sky’s the Limit!

Following the success of the first Women in...