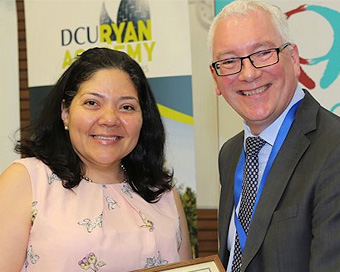 Migrants are known for their entrepreneurial spirit; one in three migrants in Ireland aspire to run their own business. As entrepreneurs, they bring many societal and economic benefits to a country, including employment, filling skills gaps and rejuvenating artisan trades.

However, migrants also face many barriers: restrictive immigration rules, discrimination, and difficulties accessing business networks and financial support. Migrant women, in particular, are often overlooked despite having run their own businesses or worked in highly-skilled roles in their countries of origin.

We speak to migrant women who are using their energy, creativity and talent to follow their entrepreneurial passions across a range of industries in Ireland.

This month we feature Mariana Cruz as part of our Women Migrants in Business Series. Mariana comes from Venezuela and relocated to Ireland in 2014. In 2018, she set up her company Mariana’s Cakes.

Mariana creates personalised cakes for special life moments: weddings, communions, confirmations, baby showers, and birthdays. She describes her target market as women between the ages of 25 to 50.

Her creations range from children’s characters like Minnie Mouse, Spiderman and unicorns to adult themes like CrossFit; a recent request was for a gin and tonic cake for a birthday party. She makes cookie cups, carrot cake, and chocolate biscuit cake, using flavours such as vanilla and coconut and combining and adapting recipes from her native Venezuela to suit Irish tastes; for example, a popular choice is pina colada cake made with Irish whiskey instead of rum.

Having trained as a baker and pastry technician, Mariana can cater for different preferences and dietary requirements, including gluten and dairy free.

Mariana decided to emigrate to Ireland five years ago. Her daughter Shirapta Huerta had come here in 2013 to study psychology; she currently works with Facebook in Dublin. Mariana arrived in Dublin, leaving behind the biscuit business, Mariana’s Cookies, she had run for almost nine years.

The factory at the time employed more than 20 staff had a daily production of over 12,000 cookies supplying large grocery chains in Venezuela. However, ongoing economic and political upheaval in Venezuela made it increasingly difficult for Mariana and her husband Jose Rodriguez to source ingredients and they made the agonising decision to close the business.

Currently working as a pastry chef and baker for Avoca café off Dublin’s Grafton Street, Mariana says she has gained valuable insights into Irish food culture and tastes. Alongside her full-time role at Avoca, Mariana is studying food science and technology at Innopharma Labs in Dublin.

She manages to fit her bespoke cake business into the hours in-between work and study.

While her company is still in the early stages, Mariana says she has “big dreams”: she is pursuing her goal of opening her own shop and café selling her custom-made cakes.

Drawing on her previous experience as a successful businesswoman, Mariana believes that “if I did it before, I could do it again.”

She says that the elements of running a company are similar no matter what part of the world you are based; as she sees it: “business is business everywhere.”

While every country has strict rules around food safety regulations, she had additional concerns in her native city, Maracaibo, where summertime temperatures can exceed 40 degrees Celsius, and keeping produce fresh is more challenging.

However, despite her background, she has encountered some barriers in business here. One of these is language; her daughter is helping her with her English and she is continually improving her skills. Another aspect of setting up a business which Mariana has found challenging is navigating Irish regulations. “I don’t know the rules here. In my country, I know where I can go and ask. But here, I don’t know the words to express what I need.”

She also has had difficulty with understanding how to access the financial supports and methods of raising capital in Ireland.

However, taking part in a tailored entrepreneurship programme run by Dublin City’s University’s Ryan Academy in partnership with the Migrant Rights Centre Ireland in 2018 has helped Mariana overcome some of these barriers.

Participating in the programme enabled her to achieve her biggest “win” so far: registering her company, Mariana’s Cakes. She also completed the food safety regulation process and received approval to bake at home last year.

The support and encouragement of her family in Ireland and Venezuela drives her to succeed. Commenting on the opportunities she has in Ireland, she says: “If I don’t do it now I never will.”

When asked about the traits which are vital to be a successful entrepreneur, Mariana cites communication with customers. She explains. “If you don’t know what they need, you can’t give them what they want.”

As an entrepreneur, Mariana “sees opportunities everywhere.” She believes that a positive attitude and sheer grit will get her to where she wants to go. “You have to work very hard because it all depends on you. I never stop.”

Persistence is key to an entrepreneur; a quality Mariana clearly has in spades. “I am very persistent. If the door is closed, I will go again. I put it in my calendar and maybe the next time I try the door will be open.”

Pictured: Mariana Cruz with Aidan O’Brien, Head of EU Funds in the Dept of Justice and Equality.

Women Migrants in Business: Next

This month we feature Eva Milka as part of...