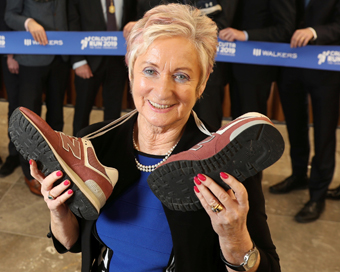 On Saturday 18 May the 21st Calcutta Run, The Legal Fundraiser, will see up to 1,500 legal professionals walk, run or cycle to raise money for the homeless in Ireland and Kolkata.

The Calcutta Run has raised a staggering €4 million over two decades. First held in 1999, the Calcutta Run raises funds for its partner charities, Peter McVerry Trust and The Hope Foundation.

Commenting at the launch, Ken Murphy, Director General of the Law Society of Ireland said the solicitors’ profession is as committed as ever to helping fight homelessness in Ireland and abroad.

“It is a source of pride to see the Calcutta Run turn 21 this year. When we started this fundraiser in 1999, we could not have predicted how the problem of homelessness would worsen. Unfortunately, it is now more important to support this cause than ever before.”

“Our partner charities rely on the Calcutta Run each year to fund specific projects. Funds from the Calcutta run have supported almost 700 detox programmes and 20 new home refurbishments in Dublin through the Peter McVerry Trust, as well as 24 hour emergency response units and sheltered accommodation in Kolkata through The Hope Foundation.”

“We are proud to be partnering with and supporting these two fantastic charities again. I look forward to seeing what the solicitors’ profession can achieve in 2019,” he said.

Pat Doyle, CEO of the Peter McVerry Trust, said, “The Calcutta Run is a fantastic initiative and we are delighted and grateful to have a long standing relationship with the event. To date, the Peter McVerry Trust has received €2 million from the Calcutta Run. This has made a huge contribution to our work over the years and our ability to respond to people experiencing homelessness in Ireland on a daily basis.”

Maureen Forrest (pictured), Founder and Director of the Hope Foundation said, “We are delighted to continue our partnership with The Calcutta Run in 2019.  It is an extraordinary event and generosity of the solicitors’ profession, through the Calcutta Run, is making an incredible difference to the children with whom we work with in Kolkata.”

The Calcutta Run unites legal professionals from across the country, their family and friends in a 5km or 10km route starting and finishing at the Law Society of Ireland, Blackhall Place via the scenic Phoenix Park on Saturday 18 May. A satellite event will also take place in Cork with funds there going towards SHARE and The Hope Foundation.

For the third year in a row, the Calcutta Cycle Sportive, a non-competitive cycle, will also take place on the same day. The 50km and 100km routes will start and finish at the Law Society of Ireland, with cyclists celebrating alongside runners at the ‘Finish Line Festival’.