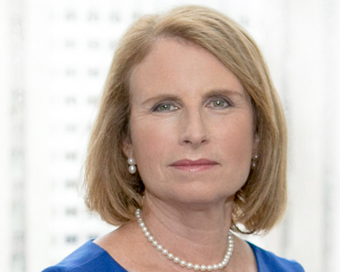 Back in the early seventies, when computers were in their infancy and took up whole rooms, a far-seeing college lecturer encouraged a promising young mathematics student to learn more about these new machines.

And Lorraine Hariton did.

As a result, the dynamic New Yorker has spent much of her career in the IT industry, with senior-level positions in Silicon Valley, not to mention leadership roles in the private, non-profit and government sectors. Hariton has served as CEO at two Silicon Valley start-ups and held senior executive roles at IBM and other public companies. In 2009, she was appointed by President Obama to be Special Representative for Commercial and Business Affairs at the US Department of State.

Most recently, she acted as Senior Vice President for Global Partnerships at the New York Academy of Sciences. Hariton is currently President and CEO of Catalyst, the global non-profit organisation focused on empowering and accelerating women in business.

And she is no stranger to the fact that not nearly enough women study IT these days.

Ironically, back when computers didn’t fit on peoples’ desks, says Hariton, more women were taking computer studies and getting degrees in IT than today, and she was one of them.

But a decade later the landscape had changed. IBM brought out the PC and when PCs went into the home they went, she explains, into the boy’s bedroom. Boys started gaming and computers were suddenly a boy thing, not a girl thing. In response to this cultural assumptions hardened and the number of girls studying computer programming dropped dramatically. The IT sector has never regained its former popularity with female students as an area of study.

Luckily for Hariton, she had been well ensconced in the tech sector since the late 1970s – she had joined IBM. It was a great place to work, she says now. “IBM was like the Google of the time,” she recalls. She uses words like ‘progressive’ and ‘very forward-looking’ when she talks about the company with which she spent a total of 15 years.

In fact she enjoyed working there so much that after completing an MBA in Harvard, Hariton went right back to work for IBM. “IBM was a great company for women to work in. It was a model of best practise for women of the time,” she says, adding that as a result of her experience there, she regularly passes on this piece of throw-down-the-ladder wisdom to the young women she meets in the course of her work: “What I say is – work in places where there are policies inclusive of women! That’s what it was like in 1977 when I went to work for IBM,” she recalls. The company also respected the work-life balance, something she really valued when her children came along in the mid-80s.

It’s beyond time to turn the tide and attract more girls into tech, and into STEM in general, says Hariton, who believes data analytics could be a key. This sector offers superb opportunities to girls, she believes: “Girls are very good at this,” she says adding however that, given the fact that so many young girls aspire to make an impact on the world through their choice of career, it should be brought home to them that data analytics and data literacy are ways to do it.

To be successful in STEM careers, she emphasises, people also need to be creative, to have the necessary skills to collaborate successfully, communicate effectively, and think critically. “The future of work is about having teams that are diverse, innovative, agile and collaborative. Just being a great Python coder in 2019 does not mean you will have a great career in 2025,” Hariton observes, adding that these are characteristics which companies are beginning to prioritise.  They are also skillsets which need to be highlighted and explained to young girls – and education is key.

In order to successfully encourage more girls into the sector, the opportunities and requirements need to be pointed out to them as early as second level education, she warns. “I think education needs to be revamped to bring these new skills into play,” she says.

One of Catalyst’s main research forums is the Future at Work. What is the future workforce going to look like, she asks? “Times are changing now with the consciousness-raising enabled by the Me Too Movement. The Harvey Weinstein affair came out because times are changing, she says. She points to the recent high-profile Gillette TV advertisement, which is a signifier, she believes, of changing attitudes.

“We have a lot of men who want to step up and make a difference, which is a major factor in the success of Catalyst’s Men Advocating Real Change Workshops,” she says, adding that companies are comprehending that innovative, competitive and inclusive workplace environments are the ones that attract the best talent: “It’s important to their brand, so diversity and inclusion is part of this and the best CEOs are doing this vocally,” she says, adding that in India, for example, multi nationals are “creating environments for women to work in that even their own country cannot provide.”

Catalyst is a global nonprofit working with some of the world’s most powerful CEOs and leading companies to build workplaces that work for women. Founded in 1962, Catalyst helps organisations remove barriers and drive change with pioneering research, practical tools, and proven solutions to accelerate and advance women into leadership — because progress for women is progress for everyone. You can visit their website here>>

Few students could claim they not only...

When I called for a chat, Anne Kiely had...