The Sisters who are Nuts about their Business 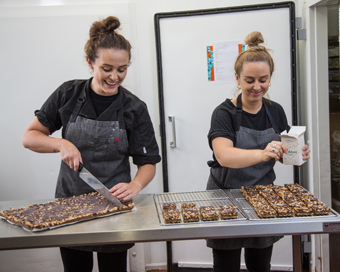 Growing up in the family business, Country Choice, in Nenagh, Co. Tipperary, Eliza and Evie Ward worked on the shop floor, “potting jams, labelling products, talking to customers, clearing tables.”  It wasn’t long before our duo would branch out to create their own line of goodies under the ‘Nutshed’ name.

Their parents Peter and Mary Ward were part of the “first wave” of the artisan movement in ‘80s Ireland which included cheese producers like Gubbeen and Milleens. As Eliza describes it: “Food wasn’t just something that appeared when you opened the fridge; it was our lifestyle.”

Family holidays were opportunities to explore other food cultures. They travelled around Italy and Spain, sampling the local fare, meeting small producers and discovering quality products to import. Eliza explains: “A man who was making wine would recommend someone down the road who made unbelievable pasta and someone else who had incredible prosciutto.”

An entrepreneurial spirit was ingrained early on. “When Evie was about 10 my dad gifted her with Nigella Lawson’s cookbook ‘How to Be a Domestic Goddess’. She would make loads of brownies, though she had no concept of how many she needed, but she was getting paid for it. I’d say they were the most expensive brownies in the whole of Tipperary”, Eliza recalls with a laugh.

A festival street food stall emerged from a project Eliza completed for her course in Culinary Arts at Cork Institute of Technology. She started with an umbrella, a grill, a table and a van rented from her dad with her sister Evie joining the crew later on. For 10 years they spent summers on the road taking in festivals like Bloom in the Park and Electric Picnic and taking over the latter’s Global Green food concept for five of those years. “We were like Duffy’s Circus,” Eliza jokes.

It was an opportune time: they realised festival goers were looking for a “food experience” and their only competition at the time was Supermac’s. Country Choice on Tour – as they called the business – partnered with Cloughjordan Ecovillage’s community farm to create menus out of the fresh produce available. “It was a labour of love for us. We’d watch what was being grown; take tomatoes and make chutneys to put in our sandwiches. We’d make kale crisps, yoghurt with a beetroot or apple puree, toasties with local cheese. We’d use organic leaves and make homemade dressings from organic rapeseed oil.”

As they honed their offering, their business emerged into “a more grown-up business” with staff and a production facility, and they’ve had to revise their ways of working to make sure everything runs efficiently.

The sisters have fallen naturally into specific roles. Evie “shines” in the kitchen, recipe testing, monitoring production, and dealing with stockists, while Eliza takes on more of the operational responsibilities. Both sisters share a vision for branding.

Nutshed came to Evie “in a dream – as corny as that sounds.” She had opened a stall in Limerick’s Milk Market in 2013 rising before 5 am on Saturdays to sell wholefoods. That summer the festival team was on the road “working mad hours, feeding thousands of people. On the way home, we might grab a bag of chips – carbs or something sugary.”

The unhealthy lifestyle was taking its toll. Having waited all winter for the queues, they were flagging in the middle of service. “We were feeding everyone the best in the world, but neglecting ourselves.”

Seeking a solution to their energy dilemma, Evie began to experiment with nuts, seeds and wholefoods to make healthy snacks. Her first creation was hemp and goji “raw balls”.

The raw balls took off, boosted by a strong Instagram following. But it was tough: Evie was working off-hours in the Country Choice kitchen; starting at 7 pm and working into the early hours to meet demand. Eliza wanted to help, telling her sister: “You can’t keep working the way you are. Let’s fine tune this.” She began planning a production unit.

It took an entire year of grant and loan applications, drawing floor plans, and buying equipment before they moved into their production unit in August 2017. Eliza admits the process was daunting and that “it nearly killed us”.

Nutshed’s products are free from gluten, dairy and refined sugar. Eliza’s favourite is the peanut butter raw ball. She describes treats such as beetroot brownie and raw caramel squares, as “wholesome but quite decadent. They taste like a bold treat, so you don’t feel like you’re too good.”

Products, including peanut butter, are available in Sprout salad bars, from Avoca, Fallon & Byrne, and independent shops, with a Shopify account coming soon.

Eliza says the food business is in their blood. “I don’t think there was ever going to be any other career for either of us”.

Change is a Constant for...

The life of Anita Sands has been “an...

Few students could claim they not only...