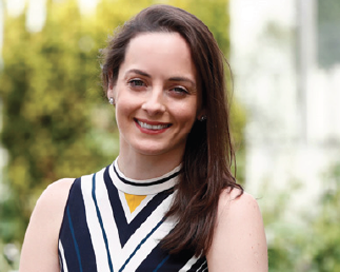 She’s a ballerina and a trained pianist, but she’s working in a fast-paced corporate environment and studying for an MBA. Helen Carroll could aptly be described as a woman where two worlds collide, but she wouldn’t have it any other way.

As Head of Communications and Partnerships at Business to Arts, a not-for-profit organisation that forms links between business and arts organisations across Ireland, the 31-year-old has regular interaction with both the arts community, and with businesses interested in partnering with, and sponsoring artists and cultural events.

“A lot of companies have sports sponsorship already so they might also want to connect with people involved in culture or the arts. “Businesses can be interested in doing anything from sponsorship of an arts festival to sponsoring a single piece of art,” says Helen, who works as part of a six-member team.

The organisation has 100 corporate members interested in forming partnerships with artists and artistic communities. One of its biggest projects to date has been with the professional services firm Accenture, which wanted to approach the issue of gender inclusion in its arts sponsorship programme: Business to Arts oversaw a visionary project under which two specially commissioned artists, one male, one female, produced five portraits of female members of the Royal Irish Academy. “All companies will have different strategies, or different issues they wish to address,” explains Helen.

Leading corporate law firm A&L Goodbody, for example, was very interested in literacy as part of its Corporate Social Responsibility Programme. In conjunction with Business to Arts, the company decided to embrace creativity at a very local level — and with young minds. The result — a writer-in-residence programme at a Dublin primary school, St Joseph’s, in East Wall.

And, when Dublin Port wanted to bring more people into the area, the company began to commission artists to create pieces of public art. Last year, for example, a special music project commissioned by Dublin Port and supported by the National Concert hall resulted in Starboard Home, an album featuring a diverse ensemble of Irish musicians, and a national Concert Hall performance.

As soon as I had finished interviewing...

Think about it – everything nowadays, in...