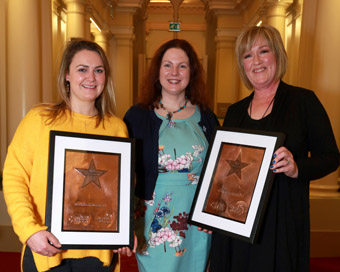 Earlier this month, the Local Enterprise Office for Dublin City announced the winners of the 2018 Women in Business Network Awards. Now in their fourteenth year, the Women in Business Network Awards recognises two outstanding members of the Local Enterprise Office’s Women’s Network, whose businesses have excelled over the past year.

Una Healy, founder of Una Healy Design, a Dublin-based creative graphic design studio, was awarded the 2018 ‘Female Entrepreneur of the Year’ Award. Una was awarded for having achieved the greatest business performance of all of the entrants over the past year.

Maeve O’Malley, founder of Meltdown Café won the 2018 ‘Rising Star’ Award for her Temple Bar-based café that specialises in gourmet toasted cheese sandwiches. Maeve was awarded for hitting some highly impressive targets and milestones during her first year.

Mary MacSweeney, Deputy Head of Economic Development and Enterprise, Local Enterprise Office Dublin City, congratulated the two winners: “I am delighted to congratulate Una and Maeve on winning their awards – and for the tremendous work that they have done to continue to grow their businesses over the past year.

“The Women in Business Network is an initiative which aims to encourage and to support women who are starting a business or who are already up and running – and to provide easy access to a supportive network that can help maximise their growth potential.

“While women are setting up businesses in greater numbers than before, women still lag behind men in the percentage involved in early stage and growth businesses.

“The Women in Business Network Awards are about championing these women who are trailblazing in the world of business. I would encourage any woman who is based in Dublin and is running or starting a business to get in touch and to see how the Network can help them grow.”

More information on joining this network can be found here>>

The Mill Enterprise Hub in partnership with...